LONDON (BLOOMBERG) - Britain's messy divorce from the European Union is once again stuck between the demands of Mrs Theresa May's divided government and the reality of what the bloc is willing to offer her - this time over how long the delay to Brexit should be.

With just nine days left until Britain is due to exit the EU, the Prime Minister is drafting a request for more time to reach a deal that will win the endorsement of Britain's sceptical Parliament. But she's facing a battle with Brussels and her own Cabinet ministers over how much time she needs.

The issue is now of critical importance, as Britain is on course to exit the bloc on March 29 if no deal - or delay - is agreed before then. The divorce agreement Mrs May spent two years negotiating was rejected twice in Britain's Parliament. Now, she says a delay is required so British politicians can regroup and decide how to proceed.

The risk is that if Britain chooses a short extension to the Brexit deadline, it could just be postponing a chaotic cliff-edge departure by three months, prolonging the uncertainty and increasing the potential costs for business.

Mrs May is due in Brussels for a summit with fellow leaders on Thursday (March 21). But with tension rising on both sides, diplomats were discussing the prospect that an emergency meeting could be needed the following week to sign off on an extension. A senior British official warned against taking for granted that the EU would easily agree to a delay this week.

Eurosceptics inside Mrs May's Cabinet hate the idea of delaying Brexit. They are plotting to stop her seeking a long delay lasting more than three months.

They fear that taking part in European Parliament elections in May will represent the government's failure to deliver Brexit, splitting the ruling Conservative party, and potentially unleashing a wave of anti-EU sentiment that could transform British politics. 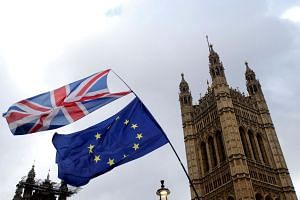 In Brussels, the picture is different, with officials likely to tell Mrs May she has just three weeks to decide whether to extend the Brexit deadline until 2020 or risk leaving with no deal in July. If Britain doesn't take part in European Parliament elections, it will be ejected in July, according to a draft EU plan.

May is drafting a letter to the EU to set out her request for extending the Article 50 deadline beyond March 29. She wants a short delay, but sees that the EU is reluctant to agree to this, fearing that Parliament is still too divided and may never vote to approve her deal, people familiar with the matter said. EU officials say a long delay is probably needed to allow for a total rethink of policy.

A hybrid option under consideration is said to involve a nine-month delay, with the option for Britain to quit the bloc if an agreement is reached sooner.

The danger for Mrs May is that a long delay will trigger a fresh wave of anger at her failure to deliver Brexit, potentially including resignations of senior ministers and a new challenge to her leadership of the party.

Late on Tuesday, a group of senior ministers including Trade Secretary Liam Fox, Commons leader Andrea Leadsom, International Development Secretary Penny Mordaunt and others met in private to discuss how to stop Mrs May agreeing to a long delay, according to people familiar with the matter.

At a Cabinet meeting earlier on Tuesday, Mr Fox suggested going for a short delay and forcing opposition Labour politicians to choose to back Mrs May's deal or watch Britain exit without an agreement in July.

Ms Leadsom told the Cabinet gathering that she was dismayed that her colleagues seemed to have given up hope of getting Mrs May's deal through a vote in the House of Commons. She said the Cabinet used to be determined to deliver Brexit but no longer seemed to be.

Some ministers are said to be considering whether to quit the Cabinet if Mrs May adopts a long delay.