LONDON (AFP) - British opposition leader Jeremy Corbyn has repeatedly beaten the odds in his long and colourful career, and may stand to benefit from government divisions over Brexit, but his leftist views and handling of disputes have proved deeply controversial.

With Prime Minister Theresa May's authority undermined by the defeat of her Brexit plans in the British Parliament on Tuesday (Jan 15), the 69-year-old socialist immediately called a vote of no-confidence in her government.

It is far from certain that Labour party leader Corbyn can muster the numbers to topple Mrs May and her ministers in Wednesday's (Jan 16) vote.

But he has capitalised on the government's discomfort on Brexit by focusing his own efforts on popular domestic policies such as re-nationalising Britain's notoriously rickety railways.

Mr Corbyn has been accused of alienating centre-left moderates in his party with a more hardline approach and failing to act quickly enough on charges of anti-Semitism against party members.

Under his leadership, some critics of his policies have also complained of being hounded by the pro-Corbyn grassroots movement Momentum - exacerbating divisions within the party.

The leftist stalwart, who has drawn comparisons to Mr Bernie Sanders in the United States, took over the party in 2015 when a change in rules meant new members could vote for the leadership, allowing his energetic supporters to pull off a stunning victory. 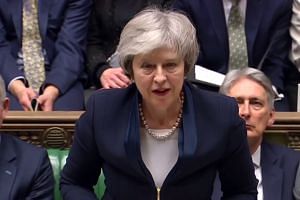 The Labour leader, a vegetarian teetotaller with a fondness for allotment gardening, is often subject to ridicule by the media.

Mrs May in 2017 gambled that she could destroy her rival at the ballot box and increase her parliamentary majority ahead of vital votes on Britain's future relationship with the EU.

But Mr Corbyn turned the situation to his advantage, casting himself as a principled outsider battling a "rigged" system.

He was able to win enough seats off Mrs May's Tories to deprive them of their parliamentary majority, silencing critics in his party.

Bearded, relaxed and normally tie-less, Mr Corbyn has cultivated an image as an amiable underdog making a stand for society's poorest, and he has managed to appeal to many younger voters.

"It seems now clear that his approach to Labour politics resonates with the public and he is undeniably strengthened," said Dr Mike Finn, politics researcher at the University of Warwick.

However, Mr Corbyn's calls for a "kinder, gentler politics" have drawn scorn from those who point to the aggressive tactics of his supporters, and his lacklustre response to the anti-Semitism row that has dogged the party since he took over.

A fixture of British politics for four decades, Mr Corbyn boasts an impeccable socialist background - his parents met as activists in Britain during the Spanish Civil War.

He had a comfortable upbringing, spending much of his childhood in a sprawling manor in a Tory-voting village in the West Midlands.

He was elected MP for Islington, a left-wing London stronghold, in 1983 and championed a variety of human rights and pacifist causes.

He was also a serial rebel against his party's line and a thorn in the side of centrist Labour prime minister Tony Blair, notably over the Iraq war.

A lifetime building up protest credentials endeared him to waves of young voters disillusioned with mainstream politics.

Angry moderates tried to oust him as party leader, only to be thwarted, again, by the popular party vote.

"Corbyn has fought and won two leadership campaigns in two years, seems to have benefited from that experience and is at least authentic rather than, like Mrs May, robotic," Professor Tim Bale at Queen Mary University of London, told AFP.

Famous for his frugality, the father-of-three holds the record among MPs for the lowest expense claims.

He does not own a car and prefers to cycle, porridge-fuelled. His hobbies include making jam.

"You do your job better if you give yourself time to collect your thoughts and do something else," he said.

His third wife Laura Alvarez is 20 years his junior and runs a company importing fair-trade coffee from her native Mexico.

They have a cat named El Gato - Spanish for "the cat" - which he sardonically claims has "socialist tendencies" because it shares its food with the neighbours' feline.