LONDON (BLOOMBERG/REUTERS/AFP/XINHUA/NYTIMES) - British Prime Minister Boris Johnson’s move to suspend Parliament weeks before Brexit has sparked furious criticism from opposition while a public petition against it has garnered more than one million signatures.

Mr Johnson's move, announced on Wednesday (Aug 28), will limit Parliament’s opportunity to derail his Brexit plans by cutting the amount of time it sits between now and the European Union exit day on Oct 31.

The British Parliament, which is on vacation, is scheduled to meet during the first two weeks of September before taking a break for annual political party conferences. It was scheduled to reconvene on Oct 9.  Mr Johnson's move means Parliament will resume on Oct 14.

Thousands of people gathered in city squares across Britain on Wednesday night to protest against the  announcement. Waving banners, they accused Mr Johnson of staging a political coup. In Manchester’s Albert Square, hundreds of protesters chanted “stop the coup” in one of the many quickly arranged protests.

The online petition against the move, signed by over a million people a few hours after it was announced, said  “Parliament must not be prorogued or dissolved unless and until” Britain’s departure from the European Union has been extended or cancelled.

In a blow for Mr Johnson's Conservative Party, Ms Ruth Davidson, the Scottish Conservative Party leader, is expected to resign her post over disagreements with Mr Johnson and the pressures of being a new mother, the Sun newspaper reported.  She is credited with turning around Tory fortunes in Scotland.  Her spokesman said she would make her position clear “in due course” and there would be no further comment.

Mr John Bercow, the Speaker of Parliament’s lower House of Commons, described the closure as a “constitutional outrage” designed to stymie debate on Brexit, with Britain currently on course to crash out without a divorce deal.

Mr Philip Hammond, a member of  Johnson’s Conservative Party and former finance minister who has pledged to block a disorderly Brexit, said it would be a constitutional outrage if Parliament cannot hold the government to account.

British PM moves to suspend parliament ahead of Brexit

A number of opposition MPs have written to the Palace to ask for an audience with the Queen to plead for the suspension plan to be overturned. Labour Party leader Jeremy Corbyn said in a statement: “I am appalled at the recklessness of Johnson’s government, which talks about sovereignty and yet is seeking to suspend Parliament to avoid scrutiny of its plans for a reckless No Deal Brexit. This is an outrage and a threat to our democracy.”

Scotland’s First Minister Nicola Sturgeon urged pro-EU lawmakers to act, describing Wednesday  as a “dark one indeed for UK democracy” if they did not.

But US President Donald Trump offered an endorsement of the move, saying it would be difficult for the Labour leader to bring a no-confidence vote against Mr Johnson, saying: “Boris is exactly what the UK has been looking for.”

Mr Guy Verhofstadt, the European Parliament’s chief Brexit official, called Mr Johnson’s move “sinister”. “As a fellow parliamentarian, my solidarity is with those fighting for their voices to be heard,” he tweeted. “Suppressing debate on profound choices is unlikely to help deliver a stable future EU-UK relationship.”

Chancellor Angela Merkel refrained from comment but her spokesman Steffen Seibert told reporters in Berlin that “this is a parliamentary procedure in Britain that is being discussed vigorously there, and won’t be commented on by the government spokesman in Germany”.

Mr Robert Craig, a constitutional expert at Durham University, said there was “theoretically absolutely nothing wrong” with the suspension, noting it was normal for a new leader to start a fresh parliamentary session.

“But the reason that it is causing outrage is because it’s reducing the number of available days for Parliament to stop a no-deal.”

Analyst Maddy Thimont Jack, from the Institute for Government think-tank, said the timing was controversial.

The pound fell as much as 1.1 per cent to US$1.2157 after Mr Johnson's announcement, adding to the uncertainty that is already discouraging companies from investing.

Queen Elizabeth, who was at her Balmoral residence in Scotland, approved Mr Johnson’s plan to suspend Parliament, a statement from the official body of advisers to the Queen, known as the Privy Council, said on Wednesday (Aug 28).

The statement confirmed that Parliament would be suspended on a day between Sept 9 and Sept 12, until Oct 14.

“We need to get on with our domestic agenda and that is why we are announcing a Queen’s Speech for Oct 14,” Mr Johnson said in a television interview broadcast. 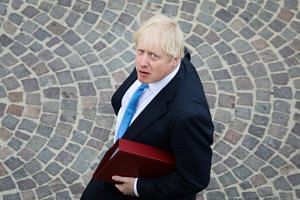 Asked about criticism from MPs that they were being denied time to debate and vote on Brexit,  he said: “That is completely untrue. If you look at what we’re doing, we’re bring forward a new legislative programme.

“There will be ample time on both sides of that crucial October 17 (European Union leaders’) summit, ample time in Parliament for MPs to debate the EU, to debate Brexit and all the other issues, ample time.”

MPs who oppose a no-deal Brexit have feared Mr Johnson would attempt to stop them meeting, and will not take it lying down. Some have talked of simply continuing to meet in another building, and defying the government. Parliament has also passed measures aimed at forcing the government to let it meet.

MPs could still move against Mr Johnson next week, possibly with a vote of no confidence. But even that could be difficult, according to Mr Martyn Atkins, a parliamentary clerk. If the Queen has already agreed to suspend Parliament, he said on Twitter, that would still apply, meaning rebels would have until the suspension date to form a new government.

"Boris Johnson is trying to use the Queen to concentrate power in his own hands - this is a deeply dangerous and irresponsible way to govern," Ms Yvette Cooper, a Labour MP who also chairs Parliament's home affairs committee, said on Twitter.

Boris Johnson is trying to use the Queen to concentrate power in his own hands - this is a deeply dangerous and irresponsible way to govern https://t.co/UEn1isXbSp

Mr Barclay also reiterated Britain’s opposition to the Irish backstop, a protocol negotiated by Mr Johnson’s predecessor to prevent a hard border between Ireland and the province of Northern Ireland.

“But if a compromise cannot be found, then we have been clear that we are leaving whatever the circumstances, on the 31st of October,” said Mr Barclay, speaking in Paris at a conference hosted by the MEDEF French business organisation.

What Boris Johnson fears more than a no-deal Brexit

“People voted for the Brexit, and it is important for democracy that we deliver,” he added.

“Businesses feel like Westminster is playing an endless game of political chess, while their futures and the health of the UK economy hang in the balance,” said Mr Adam Marshall, director general of the British Chambers of Commerce. “None of the events of the last few days have given businesses greater confidence.”

A sudden imposition of trade barriers could induce a major supply and demand-side shock, economists say. A break in the harmonisation of regulations between the UK and its largest trading partner alongside limits on the movement of people would also be devastating for services, the largest part of the British economy.

The severity of the hit will ultimately depend on the extent of the disruption at the border and just how much the fallout knocks sentiment, according to Mr Dan Hanson of Bloomberg Economics. If there is no deal, growth will probably slow sharply, though the economy should avoid a recession, he said. If there’s a more disruptive break from the bloc, there could be a year-long recession where output drops 2 per cent.

WHAT HAPPENS NEXT IN PARLIAMENT?

Wednesday's move has changed the timeframe for decision-making on Britain’s scheduled exit from the bloc. But Members of Parliament will still return from their current summer break next week, as planned, next Tuesday (Sept 3).

Parliament will still meet during the first two weeks of September, and it was already expected to break for up to three weeks for annual political party conferences. Lawmakers had then been scheduled to reconvene around Oct 9. But now the clock has started ticking, and fast.

The new five-week suspension period – or prorogation – includes the three weeks when lawmakers already anticipated being in recess, but now they won’t return until Oct. 14, when a new parliamentary session will begin.

A new session of Parliament begins with a speech by the queen setting out the government’s proposed legislation for the period, which is then debated over several days, consuming further time that lawmakers opposed to a no-deal Brexit could have used to try to tie Johnson’s hands.

The decision to end one parliamentary session and start a new one also deprives lawmakers of the power to cut short their break, further tightening the timetable. And if rebel lawmakers don’t succeed in passing legislation by the end of the current session, they will have to start the process all over again after Oct 14.

These all amount to the key result of Mr Johnson’s decision – less time for lawmakers to chart their own path towards a deal for Britain’s withdrawal from the European Union.