Prime Minister Theresa May on Monday (Jan 21) continued to reject calls for a second referendum and any delay of Britain’s withdrawal from the European Union, changing little in her Brexit Plan B presented to Parliament a week after it decisively rejected her initial divorce deal with the EU.

She also stuck to her commitment that there would be no hard border with Ireland even after Britain leaves the EU, effectively continuing the political deadlock over Brexit with 67 days to go until the March 29 departure deadline.

Mrs May did make some concessions to her opponents both within and outside her Conservative Party, promising to waive the £65 (S$114) fee for EU nationals living in Britain who apply for settled status after Brexit.

She also promised to continue to protect workers’ rights and the environment, and a more “flexible, open and inclusive” approach to keep Parliament better apprised of Brexit negotiations - both secondary criticisms raised by the Labour Party, which has been boycotting her cross-party talks aimed at coming up with a Brexit deal which enough MPs could support.

Mrs May said that moving forward, she would be talking more with other parties, and that her government would be engaging more deeply with businesses, civil society and trade unions.

But the main sticking points remained. Asked repeatedly to rule out the prospect of crashing out of the EU without a deal in place- which economists and experts have warned could lead to disastrous economic and social upheaval - Ms May declined.

“The right way to rule out No Deal is for this House to approve a deal with the European Union. That is what this Government is seeking to achieve. The only other guaranteed way to avoid a No Deal Brexit is to revoke Article 50 – which would mean staying in the EU,” she said. 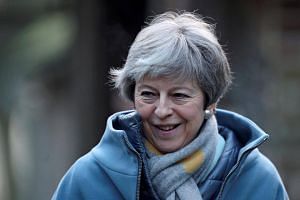 But stopping Brexit would go against the referendum result and should not be done, she added.

Mrs May stood her ground in the subsequent debate over the EU, telling MPs: “You cannot wish away No Deal. Either you stay in the EU, or you have a deal... If no one wants no deal, they have to agree to a deal.”

She also ruled out a second referendum on Brexit, arguing that it would set a difficult precedent for future referendums and could damage social cohesion by undermining the public’s faith in Britain’s democracy.

British lawmakers were also unlikely to allow a second vote, she added, saying: “I do not believe there is a majority for a Second Referendum.”

It has become a major sticking point. Some fear the UK could be trapped in protracted negotiations over the backstop, while others fear that Northern Ireland could be treated differently from the rest of the UK if it kept open borders with Ireland.

She said: “All of us agree that as we leave the European Union, we must fully respect the Belfast Agreement and not allow the creation of a hard border between Northern Ireland and Ireland... And I want to be absolutely clear, in the light of media stories this morning, this Government will not reopen the Belfast Agreement. I have never even considered doing so – and neither would I.”

Parliament will meet again next Tuesday (Jan 29) to debate a government motion on Brexit which will be opened to amendments by MPs, she added.

The Speaker has the discretion to decide which amendments may proceed to a vote, and the government may be pressured to act on those which get majority support.

So far, MPs have floated the ideas of tabling amendments to extend the March 29 withdrawal, calling for a second referendum, forming a citizen's assembly of voters who could reach a consensus on Brexit, or letting MPs cast "indicative votes" on the Brexit they prefer.

But Mrs May’s “red lines” came under attack in Parliament, with MPs slamming her for sticking to her pre-conditions of leaving the customs union and not ruling out No Deal.

Opposition leader Jeremy Corbyn accused Mrs May of having not come to terms with the scale of her parliamentary defeat of 432 to 202 votes last week, saying: “The Prime Minister seems to going through the motions of accepting that result, but in reality is in deep denial. The logic of that decisive defeat is that the Prime Minister must change her red lines because her current deal is non-deliverable. So can she be clear and explicit to the House: Which of her red lines is she prepared to move on?”

His fellow party member Angela Eagle said Mrs May was "trying to get her dead deal through the House by playing chicken with Brexiteers" in refusing to rule out No Deal.

Mrs May said she would return to Brussels to negotiate further on the Irish question, but Mr Corbyn said: “What makes her think that what she tried to renegotiate in December will succeed in January? This really does feel like Groundhog Day.”

Other MPs called on Mrs May to consider a customs union, with Conservative veteran and former chancellor Kenneth Clarke urging her to be flexible, saying: “I don’t see those agreements with outside powers lining up to do trade agreements with us to compensate us for leaving Europe.”

Mrs May replied that she had argued for frictionless trade with the EU, which had not been accepted by some remaining EU members, who nonetheless wanted to reduce frictions at the border as far as possible.

She also added that she had discussed a future trade deal between the UK and New Zealand over lunch with the New Zealand prime minister that day. They also discussed the UK’s possible membership in the Comprehensive and Progressive Agreement for Trans-Pacific Partnership, the 11-nation Pacific Rim trade deal which entered into force on Dec 30.

Exasperated business groups, meanwhile, responded to the parliamentary impasse with alarm. CBI director Carolyn Fairbairn wrote on Twitter: “This is another bleak day for business. Government’s move to consult more widely is welcome, as is the commitment to scrap the settled status charge for EU citizens, but the fundamentals have not changed. Parliament remains in deadlock while the slope to a cliff edge steepens.”

By the end of the debate, 107 MPs had questioned Mrs May on her Brexit plans. But summing up the sentiment among her colleagues, Conservative MP Sarah Wollaston wrote on Twitter: "It’s like last week’s vote never happened. Plan B is Plan A."