Prime Minister Theresa May will try to shepherd this bickering bunch into an elusive majority that can get her European Union divorce deal over the line on the third attempt on Friday (March 29) - the original Brexit day.

Her victory would keep Britain from crashing out of the bloc once the new deadline strikes on April 12.

But Mrs May knows that the odds are stacked heavily against her ability to suddenly sway a sufficient number of parliamentary hearts and minds.

Mrs May's problems stem from her inability to control her own Conservatives.

The traditionally pro-business party fundamentally disagrees over whether Brexit is good for Britain - a view Mrs May herself did not always share - and whether it should be watered down or pursued as it stands.

The most impassioned EU opponents tried to oust Mrs May in December and then helped send her deal to a historic 432-202 defeat in January.

More than a third of the party's 313 voting members opposed Mrs May's deal on both occasions. 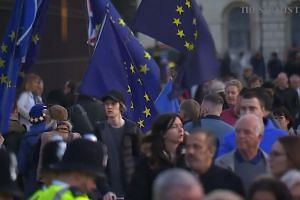 The number of rebels fell off to around a quarter when her plan lost again 391-242 on March 12.

But even those with the greatest misgivings about Brussels are starting to fear that their version of a perfect Brexit could vanish if Britain ends up asking for an extended departure delay.

Likely party leadership contender Boris Johnson said Mrs May's promise on Wednesday to quit if her deal is approved meant that he will "have to support this thing".

The key stumbling block in ensuring full Conservative support for the deal is the "backstop" solution for keeping the border open between Northern Ireland and EU member Ireland.

The DUP believes the "backstop" will split it off economically from mainland Britain. It said this week that it would rather see Brexit postponed by a year than back this version of Mrs May's deal.

They are joined by die-hard Conservatives who fear that the stop-gap arrangement will trap Britain into an open-ended trade arrangement with the EU in which it takes all the rules but makes no decisions.

The hardest of the Conservative hardcore likely number somewhere between 15 and 20.

This dwindling group thinks London's best bet is to make a clean break with Brussels without any binding deal.

They say it would let Britain immediately lower tariffs and establish its own deals with booming overseas markets in China and the United States.

But its ideological leader Jacob Rees-Mogg said he was prepared to grudgingly support Mrs May's agreement if she could get the DUP to at least abstain in the vote if not support the deal outright - something that seems unlikely by the time of Friday's ballot.

The only thing Parliament has been able to agree on - just - was a non-binding instruction for the government to make sure it does not leave without any agreement at all.

The measure passed by the threadbare majority of four votes on March 14 in what was widely seen as an attempt to show the EU that Britain could actually agree on something.

This group is comprised mostly of centrists who have grown frustrated with Mrs May's inability to win over critics at home and abroad.

Calls for a second Brexit referendum rang out almost as soon as the Leave camp won the first one in 2016.

An attempt by Parliament this week to find a last-minute alternative to Mrs May's vision saw the idea of deciding Britain's fate at the polls lose 268-295.

Organisers said more than a million people marched in London in favour of a second vote last Saturday, but many Britons remain apprehensive about the democratic merits of such a move.