WASHINGTON (WASHINGTON POST) - The Trump administration has moved to punish Huawei on national security grounds amid a bitter trade dispute with China. But in Europe, the world's largest telecommunications equipment maker has received a different reception.

Last month, the Netherlands' leading wireless carrier chose Huawei to provide equipment for its next-generation 5G wireless network. The carrier, KPN, insisted the choice was based on quality. But Huawei had another advantage: price.

Huawei underbid the existing vendor, Swedish firm Ericsson, by 60 per cent, according to two industry officials who spoke on the condition of anonymity to discuss a sensitive matter - offering a price that wouldn't even cover the cost of parts.

The company can afford to provide such steep discounts in part because it has a silent partner: the Chinese government. Huawei gets hundreds of millions of dollars in annual subsidies and, together with another Chinese firm, is guaranteed a majority share of the domestic market, the world's largest.

At the same time, Huawei's customers in the developing world can take advantage of loans at below-market interest rates, drawing on a staggering US$100 billion (S$138 billion) line of credit at state-owned banks - a level of government financial support that is unheard of for a Western company.

Over the past decade, Huawei has made similar inroads in Germany, France, Britain, Italy, Canada and throughout the developing world, offering good products at prices telecom carriers can't resist and with which rivals can't compete. 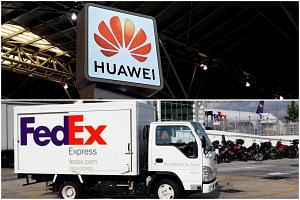 Huawei v the US: Trump risks a tech cold war

But despite Washington's warnings that Huawei equipment could be used to aid Chinese espionage or sabotage, in Europe the company is moving to expand its foothold in the 5G landscape.

In the process, it is undercutting competitors in ways that distort the market, analysts say, while stoking fears that its access could be exploited by the Chinese government to disrupt or spy on the ultrafast platforms that will power the Internet of Things, self-driving cars, military operations and more.

Still, even European officials sympathetic to the administration's security concerns are wary of barring Huawei. They worry that as part of any future trade agreement between the United States and China, President Donald Trump could agree to water down an export ban recently imposed on the company.

"Europe's biggest fear is that the US will cut a separate deal with China and leave Europe hanging," said Mr Hosuk Lee-Makiyama, director of a Brussels-based think tank, the European Centre for International Political Economy.

The US has severely restricted Huawei's presence in American networks, banning its components from US government systems and those that contract with the government. All four major US carriers - AT&T, Verizon, Sprint and T-Mobile - also have pledged not to use Huawei products in their 5G networks.

But in Europe, where the US has key military bases and important intelligence-sharing alliances, American officials are alarmed by the prospect of a Chinese company supported by an authoritarian government in Beijing providing technology that will underpin the next digital revolution.

Over the past year, US officials have waged an intense campaign to persuade European partners that Huawei poses an unacceptable security risk. They point to Justice Department indictments accusing the company of stealing intellectual property and violating US sanctions on Iran. Feeding suspicions, Poland this year arrested a Chinese employee of Huawei on allegations of spying for China.

Of particular concern, officials say, is that Huawei is beholden to a 2017 law requiring Chinese citizens and companies to assist China's security agencies in carrying out intelligence work. And, they note, the Chinese government for years has waged massive economic espionage against Western countries.

Some governments have signalled their willingness to take a middle road - barring Huawei components from their networks' "core", which they consider sensitive because it contains the routers and switches that handle massive volumes of traffic, but allowing them in some portion of the "edge", which comprises what they say are the less-sensitive radio antennas that carry signals to the core from phones and other devices.

But in 5G, these antennas will become ubiquitous and carry more computing power. Housed in cases the size of pizza boxes and affixed to street poles and buildings, they will enable super-speedy connections to all manner of devices - smartphones, highway traffic sensors, virtual reality goggles. Thus, US officials argue, the distinction between the core and edge has eroded with 5G, and Huawei must be banned from the entire system.

The government in Beijing says it expects Chinese companies to follow export control rules and observe the laws of the countries in which they do business. It has denied it hacks foreign networks for commercial advantage. And Huawei has said it does not build "back doors" in its products and would never help China spy on other countries.

The situation has forced European partners to navigate this stand-off between the US and China, and it illustrates how the economic might that Beijing has built over the past four decades in Europe and elsewhere is creating an unprecedented challenge for Washington. 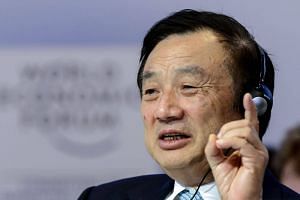 Huawei CEO admits US ban will cut into lead over rivals, objects to retaliation against Apple

Huawei's European customers put on hold by US ban

In May, Mr Trump granted his commerce secretary the power to bar Americans from buying foreign technology that might open US networks to "potentially catastrophic effects".

Though Huawei was not named in the executive order, it clears the way for an eventual commercial ban on the firm, which booked US$105 billion in sales last year. The more immediate and consequential move was a Commerce Department ban on the export of American technology and materials to Huawei without government approval.

Taken together, the measures have intensified the pressure on Beijing as the US confronts what Washington views as a blended threat to the global digital economy and to its own national security.

"It's important that the American people know that we're standing up for their interests around the world and we're not shying away from articulating what is in our national interests," said Mr Robert Strayer, deputy assistant secretary of state for cyber.

"We're trying to bring all countries around the world on this learning path about how important 5G is and what it will mean for our future economic prosperity and how important it is that we secure it," he said.

For Huawei, the 5G play is in Europe, analysts say. That's the only high-end market open to it. Huawei is one of only three major suppliers of 5G equipment in Europe - Sweden's Ericsson and Finland's Nokia are the others - and it is "desperate to dominate 5G in Europe", said Mr Lewis, of the Centre for Strategic and International Studies.

Some allies have sided with the US. Huawei is effectively shut out of Australia and Japan, and a number of European security officials agree with the US on the potential risk of Chinese espionage and network sabotage.

"The problem is not really about the company," said Mr Norbert Rottgen, a German member of Parliament who shares US security concerns. "The problem is with the relationship between Huawei and the Chinese state. It's about the trustworthiness of the Communist Party and the Chinese state, whether they are to be expected to exert influence on Huawei."

The US also has concerns about the potential risk to future military operations in Europe and the Pacific. The threat of China spying or otherwise disrupting sensitive manoeuvres has led a number of current and former Pentagon leaders to speak out.

In the coming months, European countries are expected to decide whether to allow, ban or limit Huawei as they build their 5G systems. A major consideration is the costs carriers would incur to rip out existing Huawei equipment to install that of other vendors.

"This is the cost that either the telecom operators have to cover by themselves or it would have to be covered by the state," said Mr Karol Okonski, Poland's minister of digital affairs. "In the latter case, we as Poland are not able to afford it."

"It was clear that Huawei was dumping," recalled Mr De Gucht, explaining that the company was selling its products for less than what it cost to produce them. "We had ample proof. And we came to the conclusion that this was detrimental to the long-term future and prospects of our European companies."

Though it never published its results, the commission concluded that Huawei was underbidding competitors by up to 70 per cent, he said.

In 2013, he cited Huawei for violating anti-dumping and anti-subsidy guidelines. To Mr De Gucht's chagrin, though, European companies did not support the commission's probe. They had business interests in China, and some firms were more intent on taking over their competition than cooperating in an investigation.

The probe was ended in 2014 without punitive measures. 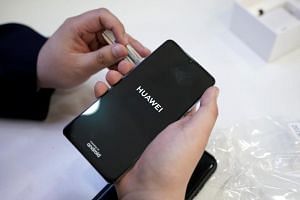 Huawei's customers, particularly in the developing world, have enjoyed financing at rates not available to customers of European companies, whose government export banks, as members of the Organisation for Economic Cooperation and Development, generally don't make loans at far below market interest rates.

"You can't compete with someone who gives stuff away for free," said Mr Lee-Makiyama, the Brussels-based analyst.

China's state-owned banks have made available for Huawei clients a US$100 billion line of credit, the firm acknowledged to The Washington Post. Less than 10 per cent has been used, a spokesman said, but even US$10 billion dwarfs the US$200 million in new loans the US Export-Import Bank granted to all customers in 2017.

Huawei also receives subsidies from the Chinese government. Last year, it took US$222 million in government grants - US$64 million of that for research and development, according to its annual report.

"This is a level of direct government subsidisation for a company that would be unheard of in the United States or Europe," said Mr Stephen Ezell, a global tech policy expert at the Information Technology and Innovation Foundation.

In recent days, British cellphone carriers EE and Vodafone have temporarily suspended their launch of Huawei 5G smartphones until they determine the scope of the US export ban. Both companies, however, have said they will continue to deploy Huawei radio equipment as they roll out 5G networks in British cities.

In the Netherlands, KPN spokesman Stijn Wesselink said Huawei's selection was based on a "lengthy, careful" process.

"Huawei, in our opinion, is world-leading on radio antenna technology," he said, noting in particular lightweight antennas and the ability to use different frequencies. "These are the main reasons why we selected Huawei."

The contract was for antennas and base stations - the lucrative network "edge". For its network core, KPN will select "a Western vendor", Mr Wesselink said.

The Dutch government, meanwhile, continues to deliberate on a 5G policy with a decision on Huawei's involvement possible in the next month.

"Our approach is not irreversible," Mr Wesselink said. "We will always comply with government policy."