WASHINGTON (AFP) - The United States on Thursday (Jan 24) ordered non-emergency embassy staff to leave Venezuela but stopped short of complying with a full expulsion ordered by Mr Nicolas Maduro, who Washington says is no longer president.

The State Department in a notice said it had "ordered non-emergency US government employees to depart Venezuela."

"The US government has limited ability to provide emergency services to US citizens in Venezuela," it said.

Amid deadly political clashes in the crisis-torn country, the State Department said that US citizens “should strongly consider departing Venezuela”.

The US said it was ignoring the order as it did not believe Mr Maduro was still president and instead recognised as interim leader Mr Juan Guaido, the opposition head of the National Assembly.

But Secretary of State Mike Pompeo said in an interview on Thursday that Mr Maduro – to whom the military leadership is still loyal – bore responsibility for the safety of US diplomats. 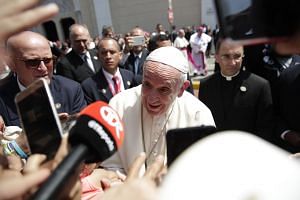 “There’s no higher priority for the State Department than to keep all the people in our missions safe and secure. And we’ve made clear to the Maduro regime that it is our expectation that they will be safe and secure,” he told conservative talk show host Laura Ingraham.

“What we want to make sure that former president Maduro knows is that he doesn’t have the right to make the decision about whether or not we stay there,” Mr Pompeo said.

State Department officials have not answered questions on how many US personnel remain in Venezuela.

Mr Maduro has also shuttered Venezuelan missions in the US.