CARACAS - Sitting on 300 billion barrels of oil - the highest proven oil reserves in the world - Venezuela was once one of the world's largest wealthiest nation per capita.

But today, its people are suffering frequent shortages of basic supplies and a doubling of the poverty rate, which threw nearly 90 per cent of Venezuelans under the poverty line, according to United Nations figures.

Their president, Mr Nicolas Maduro, is now facing the gravest challenge to his authority since assuming power in 2013 amid an economic crisis that has driven millions of people to seek refuge in neighbouring countries.

Here is a look at what went wrong:

As the oil price sank and revenues dried up in the 2010s, social welfare programmes designed for the country by former president Hugo Chavez faltered.

Venezuela, an Opec member dependent on oil sales for almost half the national budget, spiralled into its worst-ever economic crisis, with hyperinflation forecast to reach 10 million per cent in 2019 after officially entering a recession in 2014.

Opponents say Venezuela's economic crisis is a consequence of two decades of socialist policies, started by Mr Chavez, who ruled from 1999 to 2013 before he died of cancer in 2013.

Mr Maduro - a former bus driver and Mr Chavez's successor who won the presidency by a narrow margin in a 2013 disputed election - blames political foes for the dismal data.

To tackle Venezuela's hyperinflation and currency crisis, Mr Maduro removed five zeroes from the bolivar in August 2018 and linked it to a cryptocurrency called the petro.

WHY ARE PEOPLE ANGRY?

In December 2015, the price of oil plummeted to its lowest level in seven years, leading to major food and medicine shortages in the South American country. The same month, the opposition took control of the National Assembly in a landslide election victory.

Mr Maduro's impoverished citizens reacted with fury after videos of him gorging on succulent pieces of meat in a restaurant owned by a celebrity Turkish chef went viral. 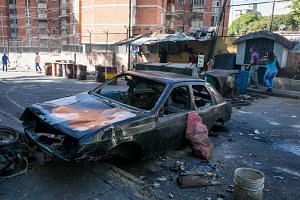 According to a study conducted by a group of top universities in Venezuela, 60 per cent of Venezuelans had lost an average of 11kg due to a diet that was lacking in protein, one of the primary nutrients contained in meat.

But some people pinned the blame for their national problems on the United States for its sanctions against their country which made it hard for Venezuela to restructure its debt.

The years of recession has seen three million people flee Venezuela - which has a population of close to 32 million according to World Bank data - since 2014, creating a migration crisis in nearby countries.

A wave of anti-government protests in February 2014, amid a deepening economic crisis, erupted into four months of clashes that were violently repressed, leaving 43 people dead.

A fresh round of street protests was triggered from April to July in 2017 when the pro-Maduro Supreme Court took over functions of the opposition-led National Assembly.

Hundreds of thousands took to the streets across Venezuela, decrying economic hardship and demanding a presidential election. At least 125 people died over the chaotic months.

Backed by Mr Juan Guaido, head of the National Assembly, protests renewed this week in Caracas and across the country with 13 deaths so far, AFP reported.

WHAT MADURO FOES ARE DOING NOW

On Monday (Jan 21), 27 soldiers staged a mutiny at a command post in Caracas, calling on people to "take to the streets" in a video circulated on social media. They were quickly arrested. Defence minister Vladimir Padrino said the men had assaulted another security post, taking four prisoners and making off with "weapons of war".

On Jan 23, Mr Guaido, declared himself the country's "acting president", disputing Mr Maduro's second term in office as illegitimate after the incumbent won a re-election in May 2018.

The US and major South American nations, including Brazil, recognised Mr Guaido as interim leader while the European Union called for free elections to restore democracy. Mexico, Russia and Cuba, however, reiterated their recognition of Mr Maduro.

The US is said to be mulling more sanctions against Venezuela, targeting items such as oil and gold.