SINGAPORE - A fashion statement on the international stage - for a good cause.

She was accompanying the Prime Minister at the Group of 20 (G-20) summit in Argentina.

Mrs Lee was spotted holding the pouch while taking a group photo with other spouses of world leaders on the sidelines of the summit.

It retails online for $48 on the school's The Art Faculty store.

The designer, who has autism, also boasts President Halimah Yacob as one of his patrons.

Madam Halimah was seen with a silver version of the dinosaur-motif clutch when she graced an Internal Security Department anniversary dinner as guest of honour in October this year.

This is also not the first time Mrs Lee has been seen with a pouch designed by Mr See Toh. 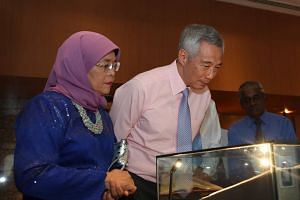 In 2016, a similar pouch caused a stir on social media when she sported it at the White House during an official visit to the United States.

After it made headlines, the pouch - the Denim Pouch-Dino Blue Black - quickly flew off the shelves, with 200 sold in the span of a few days.

His designs were so popular, some tried to profit by re-selling the pouches online, drawing criticism from both The Art Faculty and netizens.

Mrs Lee has been a fan of his work for several years, having learnt about it seven years ago from MP Denise Phua, who co-founded Pathlight School.