The dinosaur purse toted by Mrs Lee Hsien Loong at the White House has flown off the shelves, with 200 sold on Wednesday.

While it may be the first time the public has heard of See Toh Sheng Jie, the 19-year-old designer from Pathlight School, his talent for drawing dinosaurs has been known to Mrs Lee.

Soon after, a dinosaur expert from the Lee Kong Chian Natural History Museum visited the school with a real-life fossil for the students to view, said Mr See Toh, a taxi driver. 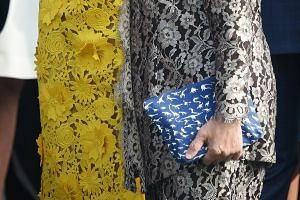 PM Lee arrives to a warm welcome at the White House

The teenager's artwork sparked a flurry of interest from the public after Mrs Lee was spotted carrying the denim purse at a welcome ceremony at the White House earlier this week. She bought the $14.80 purse at a fund-raising event.

On the media attention, Mr See Toh said: "The first thing is, we're shocked. It's an amazing surprise."

Mr See Toh and his wife, who have another 21-year-old son, said Sheng Jie has been fascinated with dinosaurs since watching the Disney animated movie Dinosaur when he was three years old.

He began sculpting models of dinosaurs using Blu-Tack, and insisted on checking out books on the prehistoric creatures during trips to the library. He soon had the facts and figures memorised, and now translates that information into detailed drawings and notes in his sketchbooks.

Mr See Toh said the family hopes to thank Mrs Lee in person for celebrating the achievements of autistic people.

He said: "There is a National Day walk in Ang Mo Kio. If Mrs Lee is there with the Prime Minister, we will thank her personally."