VANCOUVER (BLOOMBERG) - Ms Meng Wanzhou suffers from  hypertension and struggles to eat solid food. She has a sleep disorder. She is willing to put up a couple of multi-million-dollar homes as collateral.

Those are some of the arguments lawyers are wielding in a closely watched attempt to free the Huawei Technologies finance chief. Her arrest on Dec 1 unsettled global markets and thrust China’s largest technology company into the heart of sensitive negotiations between the world’s two largest economies.

In court filings, her attorneys paint a picture of a cancer survivor who has undergone multiple surgeries and needs daily medication to cope with a plethora of health issues, while outlining how her entire family has deep roots in Vancouver, where she is being held.

The 46-year-old mother of four, accused of guiding a global effort to mask violations of sanctions on sales to Iran, has languished in jail since her arrest. It is an unprecedented effort to hold accountable a senior executive who is considered part of China’s inner circle – the daughter of billionaire Huawei founder Ren Zhengfei.

Ms Meng’s lawyers argue their client has no criminal record and does not pose a flight risk.

Her team outlined her health issues in unusual detail. A survivor of thyroid cancer who also suffers from severe hypertension and sleep apnea, she needs daily access to drugs, they said.

“I continue to feel unwell and I am worried about my health deteriorating while I am incarcerated,” Ms Meng said in a filing. “I currently have difficulty eating solid foods and have had to modify my diet to address those issues. My doctor has for years provided me with daily packages of medications.”

The other prong of the argument revolves around how Vancouver plays a special role for Ms Meng – as it does for many a wealthy Chinese – a place to buy property, educate her children and just let her hair down from time to time.

Ms Meng would carve a few weeks out of her punishing travel schedule every year for a break in the city, according to court documents. She would time it for the summer, when her children would be there. Just last August, she was seen strolling through a local park, snapping photos with her in-laws.

Her place of retreat has now become a jail.

On Dec 1, Ms Meng stepped off a Cathay Pacific flight from Hong Kong around noon, and had planned a 12-hour stopover in Vancouver before heading on to Mexico. Instead, she was arrested by Canadian authorities and faces a United States extradition request on charges of conspiring to defraud banks, including HSBC Bank, so that they unwittingly cleared millions of dollars in transactions linked to Iran, in violation of US sanctions.

This time, her stay in the city looks to become an extended one - extradition cases can sometimes take years. Whether she spends that time in a cell or under house arrest may hinge in part upon her ties to Vancouver and if they are considered deep enough to stop her from fleeing.

Ms Meng's bail hearing resumes on Monday at 10am local time (2am on Tuesday, Singapore time). It is expected to last the whole day as her defence team calls witnesses, including security companies, to testify on ways to address flight risk.

"In essence, Ms Meng vacations for two weeks in Vancouver - I say that is not a meaningful connection to this jurisdiction," Crown attorney John Gibb-Carsley said last Friday at the six-hour bail hearing in Vancouver as more than 100 spectators watched from a glass-walled gallery.

Ms Meng - wearing a dark green sweat suit, her posture impeccable - watched from the back of the courtroom with her interpreter, occasionally taking notes on a sheet of paper. The 46-year-old has an incentive to flee home to China, which has no extradition treaty with the US, and she has the vast resources and connections to remain out of reach indefinitely, Mr Gibb-Carsley said.

Canada has long been a favoured destination for millionaire migrants, and Vancouver, especially, for the Asian ones. But increasingly, that has been stoking tensions in a city awash in Chinese cash, with wealthy part-time residents blamed for property prices that have made Vancouver the most unaffordable city in North America.

Ms Meng, who first visited Vancouver 15 years ago, bought a six-bedroom house with her husband Liu Xiaozong in 2009 that is now assessed at C$5.6 million (S$5.8 million), according to property records and an affidavit by Ms Meng read aloud in court. 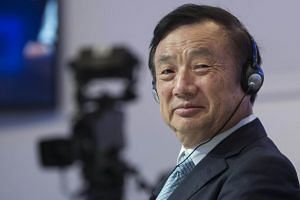 Huawei arrest shows Trump has no game plan against China

In 2016, they bought a second property, a brick-and-glass mansion set in a 21,000 sq ft lot assessed at C$16.3 million. Purchased with mortgages from HSBC, she has offered to post the family's equity in both as part of her bail.

Ms Meng and Mr Liu live in Shenzhen with their 10-year-old daughter. Ms Meng also has three sons from a previous marriage, one of whom attends a prep school in Massachusetts. If granted bail, the family would move into one of their Vancouver homes and the son in Massachusetts would join them for Christmas, Ms Meng's lawyer told the court.

Three of her four children have done part of their schooling in Vancouver, and they still spend weeks - sometimes months - in the city during summer. Ms Meng, who also goes by the names Sabrina and Cathy, holds two passports, one from China and one from Hong Kong, and until 2009 also had Canadian permanent residency.

Her defence argues that those ties are substantive, and proposes she wait it out at one of her houses, under surveillance, tagged by a GPS device, and subject to unannounced police checks.

"She would not flee," Ms Meng's defence lawyer David Martin responded. "She has a home here."

The net worth of Ms Meng's father, Mr Ren, was estimated at US$3.2 billion (S$4.4 billion), said Mr Gibb-Carsley. A million-dollar bail to that family is equivalent to a C$156 bail for an upper-middle class Canadian family with C$500,000 in assets, he said.

"I'm not saying that wealthy people can't get bail," said Mr Gibb-Carsley. "But I'm saying in terms of magnitude to feel the pull of bail, we are in a different universe."

Beyond her health and local ties, Ms Meng’s attorneys have attacked the central premises in her case. They say it was Huawei’s legal team – rather than finance – that prepared a PowerPoint presentation on Iran that Crown lawyers have held up as evidence she was complicit in an internal attempt to flout sanctions.

Ms Meng is “an accomplished individual of previous good character, who has strong roots and ties to Canada and to the Vancouver community", her lawyer Mr Martin wrote in a filing. “She presents no threat to public safety, and due to her health issues incarceration would be extremely punitive.”