The Apple Watch Series 4 represents the first redesign since the smartwatch's launch three years ago.

Compared with the Series 3 watches, the new watches have screen sizes that are over 30 per cent larger. The watch case is slightly taller and wider, but thinner and smaller in volume.

This is achieved by having thinner bezels and curving the screen's corner to match the shape of the watch. The new watches look sleeker than their predecessors, and my review unit felt great on the wrist.

The user interface and apps have been re-designed to fully utilise the bigger screen. Text has become larger, making it easier to read. 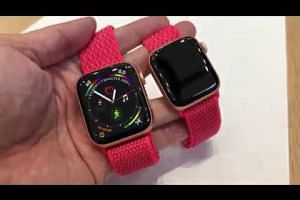 The menu buttons are also bigger for easier tapping, which is great for keying in phone numbers when you need to call someone on the smartwatch. In addition, some native apps, like Maps and Photos, go edge-to-edge allowing you to see more on the screen.

Swiping, tapping and starting apps all feel much faster, thanks to the new S4 64-bit dual-core processor. This faster processor is also needed to display new watch faces like the Infograph, which can feature up to eight complications.

The complications in the corners are also optimised for curved edges, while showing more information than before. For example, it will not only show the current temperature but also the day's temperature range using a curved line.

Other interesting watch faces include the Vapor watch face, which displays cool dynamic animations when lit up. The only downside? The watch still does not support third-party watch faces.

The Series 4's Digital Crown now comes with haptic feedback for a more mechanical and responsive feel. You will feel the incremental clicks as you scroll with the crown, which is unlike the lifeless scrolling action of previous models. You will also notice that menu interface changes will correspond to the clicks of the crown - a neat touch.

Speaker volume is now 50 per cent louder and - according to friends I called using the watch - crystal clear even when I was talking while walking along the road.

One of the best features in Series 4 has to be the improved heart rate monitor. Apple has added a new electrical heart sensor, made up of electrodes that are built into the Digital Crown and the back's sapphire crystal, to complement its existing optical heart rate sensor.

The enhancements allow the watch to detect atrial fibrillation or irregular heart rhythms. In addition, the electrical heart sensor is capable of taking an electrocardiogram (ECG) using the ECG app. But both features are only available at a later date.

But what is available now is the fall detection feature. "Falls can have serious effects, so we designed this feature to automatically connect users to emergency services when Apple Watch detects a hard fall," Mr Jeff Williams, Apple's chief operating officer, told The Straits Times.

You can enable the fall detection feature in the Watch app on your iPhone. But this feature is automatically enabled for users over the age of 65. If you are stationary for more than a minute after a fall, the watch will automatically contact emergency services.

I tried falling back on a bed and diving on a sofa to simulate a fall. But I think the impact was not great enough for it to register my attempts as falls. Guess I am no Neymar.

With the new watchOS 5 software, Apple has added automatic working workout tracking for all Apple Watch models. I tried this feature with the Series 4 and I found that automatic tracking started a mere 7 seconds after I started running, which is commendable.

But with this automatic feature turned on, the watch logged an extra 400m more over my usual 5km jogging route. Distance tracking was spot-on when I turned on the outdoor run workout mode before starting my jog.

In terms of steps tracking, the Series 4's readings were very close to those of my calibrated Series 2 watch, with a difference of only 2 per cent. That's not bad for a smartwatch that was not calibrated.

Apple said the watch can last a whole day. But in my test, in which I paired the watch to my phone all day with notifications turned on, and with a 5km jog thrown in, it still has around 60 per cent battery life left when I put it to charge at bed time.

Verdict: The Apple Watch Series 4 cements Apple's dominance in the smartwatch arena with its sleek design, useful health features and superb performance. It is undoubtedly the best smartwatch in the market.