Simply called the Razer Phone 2, it comes with high-end features like wireless charging and waterproofing to bring it on a par with flagship smartphones.

"With the Razer Phone 2, we have pulled out the stops to define flagship and gaming on our terms," said Razer's chief executive officer Tan Min-Liang.

While its design is largely unchanged from the previous model, the Razer Phone 2 now has a glass back - similar to most premium smartphones - to enable wireless charging.

This glass back is adorned with a backlit version of Razer's triple-headed snake logo. Users can pick their preferred backlight colour (from 16.8 million colours) and enable various lighting effects. This backlight can also be used for notifications, for instance, a green glow could indicate a new WhatsApp message. A new wireless charger that supports this Chroma RGB lighting feature is also available.

In addition, Razer says its new smartphone has a IP67 water resistance rating that can survive being submerged in shallow water of down to 1m for 30 minutes.

The Razer Phone 2 has a new dual-camera system with optical image stabilisation to help those with less-steady hands take crisp and good photos. A telephoto secondary camera offers up to 2x optical zoom.

Its 5.7-inch display has a 120Hz refresh rate for smooth and stutter-free performance. This screen is said to be 50 per cent brighter than the display of the previous model. It is also optimised for mobile games such as PUBG Mobile, Marvel Future Fight and Runescape.

The screen is sandwiched by dual front-facing speakers at the top and bottom bezels. Razer says its smartphone is officially certified by Netflix for supporting high dynamic range (HDR) video and Dolby Surround 5.1 audio. 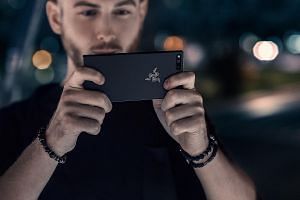 Razer Phone: Made for gaming

It runs the Android 8.1 mobile operating system, powered by Qualcomm's top Snapdragon 845 processor. It has 64GB of internal storage (expandable with a microSD card to 2TB) and 8GB of system memory.

The Razer Phone 2 comes with either a mirror finish or a satin finish. It is priced at US$799 (S$1,103) in the United States, with pre-orders available now in select markets. Local pricing and availability have yet to be announced, though Singtel is the exclusive local telco for the Razer Phone 2.

First is the Razer Raiju mobile controller, a Bluetooth gamepad with four remappable buttons and a mount for attaching a compatible smartphone. It works with a number of the latest smartphones, such as the Samsung Galaxy S9 and Note9 phones, Huawei P20 Pro and the Google Pixel 2 XL. It will be priced at $239.90 and will be available worldwide in the fourth quarter of this year.

The Razer Hammerhead is an active noise-cancelling in-ear headset that connects to devices via the USB Type-C port. It has a built-in digital-to-audio converter (DAC) and an inline control and microphone. Available globally in this year's fourth quarter, the Hammerhead will cost $159.90.

Razer also revealed a new and more affordable version of its Blade 15 gaming laptop. The new Razer 15 Base Model starts at $2,499.90 and will be available in Asia-Pacific next month. Previously, a high-end Razer 15 starts at $2,899.90.

This new Base Model is not as slim as the current Blade 15. But Razer says this allows for an Ethernet port for faster connectivity. It also only has a single-zone RGB backlit keyboard instead of having individual backlighting for each key. It comes with a dual-storage configuration of a solid-state drive and a hard drive.

In addition, there is a new limited colour option for the current Blade 15. The new Mercury White option has a matte white finish with black USB ports, while the Razer logo is not illuminated. However, it is only available sometime in the fourth quarter of this year in the US, Canada and China.