LONDON - Gaming company Razer has entered the competitive smartphone market with the release of its first smartphone, simply called the Razer Phone, a gaming-centric phone with beefy specs.

The company, best best known for its line of gaming accessories and peripherals, announced the first product from its mobile division on Wednesday (Nov 1) night in London, with its chief executive, Singaporean Tan Min-Liang, giving the keynote address.

A Razer smartphone has been rumoured to be in the making since the firm's acquisition of phone manufacturer Nextbit earlier this January.

The Razer Phone runs on a stock version of the Android 7.1 operating system, with an Android 8 update due in 2018, and comes encased in a black all-aluminium smartphone body.

It will retail for US$699.99 (S$952). The first countries to get the phone are the United States, Canada, United Kingdom, Ireland, Germany, France, Denmark and Sweden on Nov 17.

Local pricing and availability are currently unavailable, but Razer is expected to release more details following the phone’s initial launch.

“It’s common knowledge that I’m obsessed with my smartphones, I play a ton of games on them, and they’re my go-to for streaming content,” Mr Tan said.

“We have wanted to make a phone with gaming-level tech for years, and the Razer Phone delivers in every way we imagined.”

The Razer Phone sports a 5.72-inch 2k Quad-HD screen with a 120Hz refresh rate - a step up from the industry standard of 60Hz, which translates to smoother performance and improved responsiveness when swiping on the device's touchscreen. It will also be the first smartphone released with such a refresh rate.

Razer has partnered with gaming companies, such as Tencent and Square Enix, to optimise their gaming apps, such as Arena of Valor and Final Fantasy XV Pocket Edition respectively, for the Razer Phone’s display. Partner companies will be increasing their games’ framerates to 120 frames per second, leading to smoother, crisper graphics. 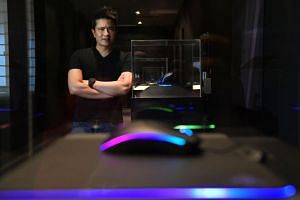 Razer CEO to become a billionaire after IPO

Razer Phone targets mobile gamers, but is it enough to compete with Apple and Samsung?

Other games which will be updated in due time include World of Tanks Blitz, Lineage 2: Revolution and Shadowgun Legends.

The Razer Phone also comes with the latest Snapdragon 835 processor and massive 8GB of RAM, which will allow it to power even the most intensive of games. Razer joins a select group of smartphone manufacturers to squeeze 8GB of RAM into a phone, with others like Asus' Zenfone AR - which needs the juice for its augmented-reality features - and the OnePlus 5.

The phone will come with 64GB of onboard storage, and expandable storage via a microSD card of up to 2TB.

The Razer Phone also packs a huge 4,000mAh battery, which should provide enough juice for gamers on-the-go to keep playing through the day. It is also equipped with fast-charging capabilities.

The United States-based company, which has its headquarters in both San Francisco and Singapore, launched the Razer Phone just a day after it announced its pricing for an initial public offering in Hong Kong. The firm is seeking to raise up to US$545 million, which would value the company at up to US$4.55 billion, putting founder Mr Tan on track to become a billionaire with a net worth of US$1.2 billion.

Razer is also integrating audiophile-quality playback features into the phone, due to its acquisition of audio-visual company THX - founded by Star Wars creator George Lucas - in October 2016. While the Razer Phone also ditches the 3.5mm headphone jack, it comes with a THX-certified USB-C audio adapter with a 24-bit digital audio convertor for high-resolution audio playback.

The phone also has two front-facing speakers with Dolby Atmos support, which gives it slightly larger bezels on the top and bottom of the phone.

However, it still follows the current design trend of smartphone screens stretching from edge to edge, with minimal bezels on the left and right sides.

On the photography front, the Razer Phone also follows 2017’s trend of dual rear cameras for handsets, with a 12-megapixel wide angle lens, and a 12-megapixel zoom camera.

The all-metal phone is about 8mm thick, with Razer’s famous triple-headed snake logo emblazoned on the back in silver. Razer is releasing 1,337 limited edition versions of the phone that feature the logo in its original iconic green instead.