SINGAPORE - Ironman Asia, organiser of the Nov 29 to Dec 1 Standard Chartered Singapore Marathon (SCSM), has acknowledged that it "could have done better" with certain aspects of its handling of this year's event but added that overall response from stakeholders to the race's first evening flag-off has been positive.

This comes on the back of flak the annual event has received from those affected by road closures in the downtown city area.

Some motorists claimed they were stuck on the roads for over two hours, while couples holding wedding banquets in town also encountered problems, with guests and vendors unable to make the functions in time.

Noting this, Ironman managing director Geoff Meyer told The Straits Times in an interview on Tuesday (Dec 3): "This is our first year of holding it in the evening, and there were issues, but overall the feedback has been positive.

"We apologise for the (congestion in the) Sentosa-Vivocity area... That was not done as well as it could have been, and we could have done better with small changes."

Motorists attempting to leave Sentosa on Saturday night - when the main 42km marathon race took place - were reportedly stuck in a jam for as long as 90 minutes.

The marathon, which usually flags off pre-dawn, started at 6pm this year in a shift Ironman hopes will increase its chances of being listed among the Abbott World Marathon Majors, a series of the most prestigious marathons in the world.

When asked if Ironman would consider moving next year's race back to the morning, Meyer said such a move would be a "whole-of-government decision" but added: "In our opinion, it would be the last thing we want to do."

Ironman and national sports agency Sport Singapore had announced road closures for this year's race on Nov 12, 2 ½ weeks before the SCSM. 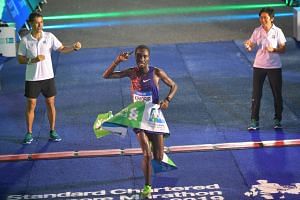 While road closures would begin from 1pm on Nov 30, they assured that routes to emergency and essential services such as hospitals would remain accessible, and encouraged those travelling into the downtown city area to use the MRT. They also advised those who wished to drive into the area to rely on apps like Google Maps or Waze for navigation and real-time traffic updates and provided a hotline for members of the public as well as a list of alternative routes for drivers in the marathon zone on its official website.

Some of the road closures were lifted on the night of the marathon - Nicoll Highway was the earliest to reopen at 9pm - and normal traffic activity resumed around noon on Sunday.

Organisers revealed then that they had engaged over 250 stakeholders in the downtown city area before coming up with the plans for road closures. This included hotels and shopping malls.

The downtown area was particularly crowded on the weekend of the race because of an unprecedented convergence of three other events with the SCSM: a concert by Irish rockers U2 , C3 Anime Festival Asia (AFA) and Christmas Wonderland at Gardens by the Bay.

Meyer added: "We created toolkits for these stakeholders so they could (show) their guests or patrons how to get there, get around closures, and so on... But can we do better? Always, we can."