SINGAPORE (THE NEW PAPER) - While most 17-year-olds are making carefree decisions with the impetuousness of youth, Joel Koh was making a significant life decision.

In June, the shuttler decided to quit his Sports and Leisure Management course at Republic Polytechnic to focus on training full-time.

Joel emphasised to The New Paper that he had not put school on hold but stopped it altogether, not just to train for Oct 6-18's Youth Olympic Games (YOG) in in Buenos Aires, Argentina, but for the foreseeable future.

He dispensed the safety net of school and backed his badminton dream.

Explaining why, Joel said: "It's so I can fully focus on one thing, instead of juggling school and sports...

"I thought I could manage both because I was still getting results when I was studying and playing badminton.

"But during the first four months of the year, I was struggling to get the results I wanted (at tournaments).

"So, I started seriously thinking about stopping school altogether because, in the long term, I believe I have to potential to go far (in badminton).

"My mum's first reaction was not to allow it, especially because I wasn't putting my studies on hold. She said I would have nothing to fall back on if I stopped school.

"But I gave her examples of how I could make a career out of badminton and eventually convinced her."

Joel explained that "going far" means being among the top 30 players in the world, a target he said he would work towards once he finishes national service. He hasn't received his enlistment date yet.

The former Singapore Sports School student is currently No. 17 in the Badminton World Federation junior rankings, the second-highest Singaporean in the standings, after 18-year-old Jason Teh, who is ranked 10th.

Joel was selected as the Singapore Badminton Association's sole male representative for the YOG based on his ranking on May 3, the closing date for selection.

He was then the Republic's highest ranked shuttler at No. 24 in the youth world rankings.

Ahead of his long-term goal of cracking the top 30 of the senior rankings, and "dream of making the top 10", he is targeting a medal in Buenos Aires. 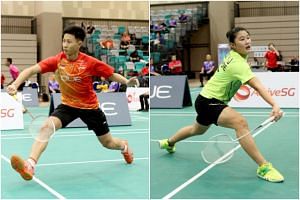 Said Joel: "With the YOG coming up, there is a higher intensity to training, and more focus.

"Every day is precious because you can't waste time if you want to be in the best condition possible when you are there."

He trains six times a week, with double sessions on four of those days.

While he says that he gets an average of an extra hour of training each day since stopping school, the main difference since he started training full- time has been that he has more rest time between sessions, compared to when he had to shuttle between class and badminton.

He said: "I feel my body has become stronger because I'm getting the rest I need to improve."

National singles coach Kelvin Ho believes Joel's mental strength has grown in leaps and bounds, adding that his charge now "dares to try new and different styles to add to his game".

On Joel's decision to stop school to train full-time, the former national shuttler added: "I think that says a lot about how focused he is to become better in this sport.

"It shows that he is able to make big life decisions and take ownership of what he is doing, which will help in his badminton career, too."

If Joel eventually achieves his career goals, he may look back at a bold choice he made at 17 as being pivotal to that success.