In Jonathan Chan's world of competitive diving, precision means everything.

It is the reason he is bound for Tokyo in six months, when he will become the first Singaporean to feature in the sport at the Olympics.

In his event, Chan explains, you get six jumps but rarely does a diver feel he has been precise enough in his execution each time.

But he did at last September's Asian Diving Cup in Kuala Lumpur. His score of 407.90 in the 10m platform final saw him beat China's Wang Zewei (393.45) and North Korean Ri Kwon Hyok (347.25) to the gold medal, which came with a ticket to the Olympics.

"Normally in the six dives, one or two would be not as good as you would like," said Chan, 22, whose historic achievement earned him a nomination for The Straits Times Athlete of the Year Award.

"But in KL, it was different. I felt I did well for all my dives. I really didn't expect it."

Divers enter the water at 50kmh and the margins between a good and bad attempt are therefore very fine. For the bespectacled Chan, who seems to have a permanent grin on his face, the sensation of the former is unmistakable.

"A lot of things can go wrong during a dive but, when you have a good one, you can just feel it... and then you get a sense of achievement," he said.

He also knows first-hand the consequences of an imperfect dive. In 2014, as he was preparing for that year's Youth Olympic Games (YOG) in Nanjing, he botched a dive in training and landed flat on his back - "splatting" as he calls it. 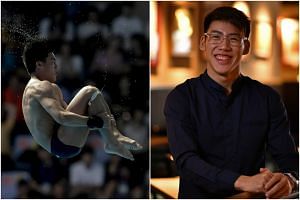 Diving: Jonathan Chan is first Singaporean diver to qualify for the Olympics

"It felt like a smack at first," he said. "Then I felt pins and needles from my back to my arms, and then numbness for a second... and then it started to burn."

He was rushed to the hospital where it was discovered he suffered a minor pneumothorax, or collapsed lungs. Air bubbles had formed inside his lungs. Doctors, worried the pressure from diving could exacerbate the injury, barred him from the pool for two months.

"That was really frustrating, only being able to do dry training ahead of the biggest competition," he said. "And the rush back to try and get ready for the YOG was intense."

He eventually finished 10th out of 11 divers in China.

He has fully recovered from that injury but the sporting journey is filled with hurdles.

Challenges for him now, as a second-year architecture major at the Singapore University of Technology and Design in Changi, include simply getting to training at the Singapore Sports Hub in Kallang in time.

His school helps, allowing him to claim taxi fares to training, although he still takes the MRT back to the hostel at night.

Another is managing unfamiliar pressure. Chan jokes he received two rewards for qualifying for the Olympics - "more media interviews and more expectations from my relatives".

He is at the OCBC Aquatic Centre five days every week, with each practice lasting almost four hours. He also fits in a 90-minute strength and conditioning session at the university on top of this load.

And yet, it is not enough for some. As he wryly says: "During Chinese New Year, I get relatives telling me to increase my training. Some even tell me to bring back the gold medal."

Nevertheless, he is looking forward to full-time training from May, when there is a term break.

He is still unsure of his goals for the Olympics but is determined to produce his best.

Asked what the perfect dive means to him, he said: "It's that one-in-1,000 (successful effort) that you're trying to hit."

When he steps onto the diving board in Tokyo, he will be ready to deliver an impeccable performance.

A version of this article appeared in the print edition of The Straits Times on February 07, 2020, with the headline 'Ready for the plunge of his life'. Subscribe
Topics:
More
Whatsapp Linkedin FB Messenger Telegram Reddit WeChat Pinterest Print Purchase Article Copy permalink