MILAN (AFP) - Francesco Molinari was hailed in his native Italy on Monday (Oct 1) for his "out of this world" performance that helped seal a resounding victory for Europe over the United States in the Ryder Cup.

The British Open champion became the first European player to win all five of his matches at a Ryder Cup, as he eased to a 4 and 2 win over Phil Mickelson to secure the hosts the trophy by 17.5 to 10.5 at Le Golf National outside Paris on Sunday.

"Molinari in outer space in the Ryder Cup: decisive point and record wins," it said.

Gazzetta Dello Sport wrote: "Mr Ryder is an Italian. Molinari goes beyond the limits of expectations."

His performance capped a remarkable season that began with his maiden Major title at Carnoustie in July. And he is the first player from either side to claim five points at a Ryder Cup since the USA's Larry Nelson in 1979.

The Turin native's heroics were seen as a boost for golf in Italy, with the 2022 Ryder Cup to be hosted at the Marco Simone Golf and Country club outside Rome. 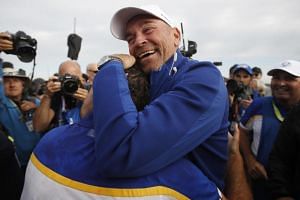 I'm one of the reasons we lost Ryder Cup, says Tiger Woods

"The hope is that the great performances of Francesco were only a warm-up for the Ryder Cup in Rome," said Franco Chimenti, president of the Italian Golf Federation.

"In four years we'll have an even more beautiful Ryder Cup thanks to him."

He added: "A player who wins everything in the Ryder Cup for three consecutive days must be considered among the most important athletes not only in Italian but world sport.

Ryder Cup 2022 project director Gian Paolo Montali said he hoped the Francesco effect would rub off on the popularity of golf beyond the Rome Ryder Cup.

"The eyes of the whole world will be on us," he said.