Three-time Formula One champion Niki Lauda died on Monday (May 20) at the age of 70 after battling declining health.

Here are five facts about the man regarded as one of the finest racers of all time:

Born in Vienna on Feb 22, 1949, Niki Lauda got into motor racing against his family's wishes and started his career as a Formula Two driver in 1971 with March Engineering.

He eventually joined Ferrari in 1974 and finished fourth in the World Drivers' Championship in his debut season with the Italian team where he won his first race at the Spanish Grand Prix. He won two championships with Ferrari over the next three years (1975 and 1977).

He had a near-fatal crash at the 1976 German Grand Prix after a failed race boycott over safety measures at the track. He suffered severe burns to his face and damaged his lungs while he was trapped in his car that had burst into flames.

The Austrian made a remarkable comeback after missing two races but lost out on the 1976 title by one point - to arch rival James Hunt of McLaren - after retiring in the final race in Japan due to dangerous conditions.

Lauda raced with Brabham, owned by former Formula One supremo Bernie Ecclestone, from 1978 to 1979 before retiring after two unsuccessful seasons. He made his F1 comeback in 1982 with McLaren and won his third title and his first with McLaren in two years later, beating team mate Alain Prost by 0.5 points - even though Prost won more races. 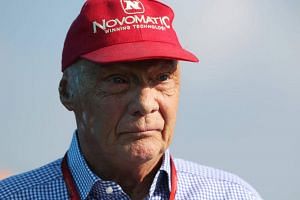 The 1985 season was his last as a Formula One racing driver and he left with 25 Grand Prix wins. He was inducted into International Motorsports Hall of Fame in 1993.

5. From driver to businessman

He founded Austrian airline Lauda Air in 1979 and Niki, an Austrian low-cost airline, in 2003. Lauda held a commercial pilot's licence and occasionally took command of their Airbus jets. In 2016, he took over another Austrian chartered airline i and renamed it Laudamotion.

He had a consulting role with Ferrari in 1993 and was Jaguar's team principal between 2001 and 2002. He was named Mercedes' non-executive chairman prior to the 2013 season and was involved in negotiations to sign Lewis Hamilton, who would go on to win four championships with the team.