LONDON (AFP, REUTERS) - When teenager Rayan Clarke rolled a pass off the centre spot at Tottenham Hotspur's gleaming new stadium on Sunday (March 24) it kicked off a new chapter for the storied north London club.

It also marked the end of a long exile for Tottenham's fans, 30,000 of whom watched their under-18s take on Southampton in the first match at the 62,062-seat arena.

The official homecoming after 680 days lodging at Wembley is on April 3 against Crystal Palace in the Premier League.

But Sunday marked a significant day for fans walking down a sunny High Road, which leads to the stadium, for the first of two test events.

Once inside the reaction was a unanimous "wow!" as the majority got a first glimpse of the futuristic ground built at a cost of around one billion pounds (S$1.78 billion) on top of the old White Hart Lane ground that had been home since 1899.

"Out of this world," said supporter of 50 years Jim Munroe, sitting alongside his son in the West Stand. "The design is absolutely superb. You've got to compliment the chairman (Daniel Levy) on the attention to detail.

"This makes Arsenal's ground look silly." With a handy sense of occasion London-born J'Neil Bennett christened the stadium by curling in his side's opener in the 3-1 win. Harry Kane would have been proud of it.

Maurizio Pochettino, son of manager Mauricio, appeared as a second-half substitute while his dad, who has established Tottenham in the top four in England and steered them to the Champions League quarter-finals addressed fans at halftime.

"The old ground was magic, but this is going to be unbelievable," he said. "I remember the feeling when we played our last game there, it was emotional and we were crying, today the feeling is the same."

Pochettino acknowledged the vision of Levy who, in his programme notes, described the day as an historic one for the club he has run for 18 years.

Pochettino has been linked with vacancies at Real Madrid and Manchester United but the Argentinian has repeatedly made clear his wish to still be in charge when the senior Spurs side play at the new ground.

"I think it is unbelievable, it is so difficult to explain in only a few words," he said as he surveyed the scene on Sunday.

"We all feel the same, so excited, I got the same feeling when we left White Hart Lane on the last day, we were crying and now in the first day in the new stadium we feel the same emotion. We need to cry because our dream became true."

Should everything follow the revised plan, and the Palace match take place as scheduled, Tottenham will play the home leg of their Champions League quarter-final against Manchester City at their new ground rather than at Wembley, which has been a temporary base while the building work has been in progress. 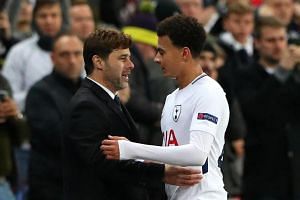 Football: Pochettino jokes about blacking out tunnel in Spurs' new stadium so brawls can't be seen

"We are in a very good place in the Premier League and of course we have a massive challenge in the quarter-final of the Champions League and I think with all of our fans, 62,000, it is going to be fantastic to play and we can make it possible our dream to be in the semi-final," said Pochettino. "Why not?"

Meanwhile Pochettino saluted Tottenham supporters for their patience during the 679 days since the last game at White Hart Lane, with the new ground's planned opening at the start of this season delayed before a new date in September was also shelved following the failure of "critical alarm systems".

"Thank you so much to the fans for being so patient because in the last two years we moved to Wembley and (had) all the problems it means to move from your home to Wembley," Pochettino said. "But now all the effort has paid off and it is going to be amazing."

Tottenham's 2,533rd and last competitive match at the old White Hart Lane ground, where the 36,000 capacity limited their ability to compete financially with city rivals Arsenal and Chelsea, was a 2-1 win over Manchester United in May 2017.

The move back home was supposed to be at the start of this season but the vast project, including housing, a school, a hotel, a museum, a micro-brewery and a supermarket-sized club shop, was hit by a series of delays.

First impressions suggest the wait was worthwhile, even if there were gripes about the "self-flushing toilets". Intrinsic to Levy's vision was retaining the atmosphere that is often sacrificed when modern stadia replace Victorian-era grounds. With steeply-raked seats even fans high up are close to the action while the front seats are as close as five metres away.

Pride of place is the 17,500-seat single-tier Park Lane stand which has the feel of Borussia Dortmund's 'Yellow Wall'.

A replica of the club's famous golden cockerel sits on the top of the South Stand - complete with a dent apparently caused by former Tottenham favourite Paul Gascoigne.

In the concourses spread over nine floors fans find plenty of reminders of the club's glory days, including the Lane Centre Spot, a plaque indicating the location of the old centre circle.

Among the 65 catering outlets spread around the stadium is the Goal Line Bar, at 65 metres the longest in Europe.

"Let's just hope we have plenty to celebrate in it," said one fan as he clicked some souvenir snaps.