LONDON (AFP) - Homegrown hero Harry Kane scored Tottenham Hotspur's last goal at White Hart Lane as they bade farewell to their home with a 2-1 victory over Manchester United on Sunday.

Kane, born up the road in Chingford, added to Victor Wanyama's early header to secure a victory that confirmed Spurs will finish in second place in the Premier League and ended United's hopes of a top-four finish.

Demolition work at the Lane, Spurs' home since 1899, will start on Monday, with Mauricio Pochettino's side playing at Wembley next season before moving into their new ground, which is being built on the same site, in 2018.

The Lane has been graced by such Spurs greats as Jimmy Greaves, Steve Perryman and Glenn Hoddle and it was fitting that Kane, emblem of their exciting current side, should be their final goal-scorer there.

It was Spurs' 14th successive home league win - equalling the club record, set over two seasons in 1987 - and meant they finished a league campaign unbeaten at home for the first time since 1964-65.

An on-pitch ceremony featuring famous figures from the club's past was due to take place after the match.

Sixth-place United, who replied through Wayne Rooney, fell to a second successive league defeat, having seen a 25-game unbeaten run ended by a 2-0 loss down the road at Arsenal last weekend.

Guaranteed to finish outside the top four for the third time in four seasons, Jose Mourinho's team must now beat Ajax in the Europa League final in Stockholm on May 24 to procure a place in the Champions League.

The teams emerged to find the famous old arena awash with blue and white as Spurs' fans waved flags bearing the legend "THE LANE, THE FINALE" and filled the air with songs.

Mourinho made eight changes to the team that had edged Celta Vigo in the Europa League semi-finals on Thursday, with 19-year-old defender Axel Tuanzebe lining up in midfield, and within six minutes his side were behind.

Spurs played a corner short on the left and Ben Davies's deep cross was emphatically headed home by the leaping Wanyama. 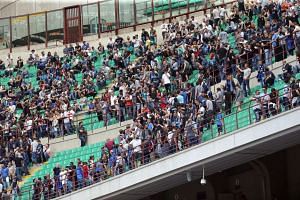 Football: Fans walk out for an early lunch as Inter slump to defeat again

United briefly threatened to draw level, Rooney heading over the bar from a Daley Blind corner and then playing an outside-of-the-foot pass down the line to Anthony Martial, who cut in and curled wide.

United goalkeeper David de Gea was the busiest man in the stadium, parrying a strike by Son Heung-Min, acrobatically denying Dele Alli and saving with his legs from Kane, who also clipped the bar with a header.

Kane struck three minutes into the second half, innovatively volleying home Christian Eriksen's free-kick from the left to take his goal tally for the league campaign to 22.

Rooney reduced the arrears in the 71st minute, prodding in Martial's low cross and giving United their first goal in an away game against another member of the top six this season at the fifth and final attempt.

As a steady rain began to fall, Alli came close to restoring Spurs' two-goal cushion, but his curling effort was headed off the line by Phil Jones.