SINGAPORE - Since grabbing his first Singapore Premier League (SPL) goal in the 1-0 win over Young Lions in April, 17-year-old Geylang International striker Vasileios Zikos Chua has shown he is no flash in the pan by scoring four more goals, including two more matchwinners.

His latest effort in the 1-0 win over defending champions Albirex Niigata on Friday (July 26) takes him level with more established names like Sahil Suhaimi and Hafiz Nor as the third highest-scoring local player.

But more importantly, it may prove to be a crucial milestone in his fledgling career as he caught the eye of Matsumoto Yamaga president Fumiyuki Kanda and general manager Yoshiyuki Kato.

The duo, who were in town to launch the Epson Youth Challenge 2019, caught the Eagles and Vasileios in action at Our Tampines Hub and were impressed with the teenager.

As such, they have invited him for a training stint with the J1 League club. The details will be finalised on a later date.

Vasileios said: "I'm looking forward to training in Yamaga again having been there in 2016. I remember being very impressed by the facilities and the fans. The standard in Japan is high and it is also a level I aspire to reach.

"I'm grateful for this opportunity and thankful for my coaches and senior team-mates who have been so willing to help and place their trust in a 17-year-old like me."

Geylang coach Noor Ali, who coached him at Tanjong Katong Secondary School for four years and had spent 10 months in Yamaga taking their Under-18 B team to the league title, added: "Training with Yamaga will help a lot with his development as he is still only 17.

"He will have coaches who can help him in certain aspects of his game, such as making better use of his physique and becoming physically stronger and more imposing. I hope he will get both a team and personal training programme over there because J.League teams are generally better equipped than us. 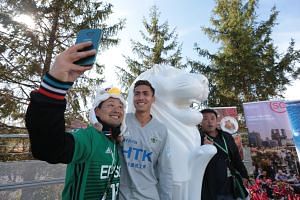 "Zikos has good attitude, fantastic discipline, and most importantly, the support of his parents, school, club and coaches, which keeps his motivation levels high. Thanks to the Geylang-Yamaga tie-up through our common sponsors Epson, he will get the opportunity to take his game to the next level."

In 2016, Geylang and Yamaga signed a memorandum of understanding and have sent players such as Gabriel Quak and Shawal Anuar to Matsumoto for attachments. Last year, Anders Aplin was signed on loan for the second part of their victorious J2 League campaign.

Geylang chairman Ben Teng said: "There are plenty of benefits arising from this partnership as we send our coaches, staff and players for various attachment programmes to expose them to not just football related but the culture of Japan."

Other collaborations include the Epson Youth Challenge, which is entering its fourth edition this year, and is held in conjunction with Get Active! Singapore's Pesta Sukan.

With a total of five age categories from U-9s to U-18s, the five-a-side matches featuring 167 teams and around 1,500 players will be played over this week, with the Finals to be held at Our Tampines Hub on Sunday.

The finalists from all categories will receive an exclusive local football clinic from Yamaga's coaches, as well as Epson products.

Thanking partners such as Epson Singapore, Active SG, the Football Association of Singapore and Geylang International, Kanda said: "It is nice to see many children enjoying themselves. Using the community space at Our Tampines Hub, the atmosphere at the stadium was great and we hope to be able to emulate this back in Japan."

Epson Singapore regional director Alvin Tan added: "The Epson Youth Challenge has established itself as a good platform to bring stakeholders together in various capacities as we contribute towards the bigger picture for sustainable development growth of local sports.

"This year, we collaborated with GIFC, Active SG and the (FAS) Football Association of Singapore to create a carnival-like atmosphere at Our Tampines Hub as we aim to bring in more participants not just for a competitive Finals but also for the community and their families to bond together."