The 31-year-old Welsh forward was finally unveiled on Saturday (Sept 19), more than 24 hours after arriving at Tottenham's training ground to complete his loan move.

Spurs said in a statement that Bale, who injured his knee playing for Wales this month, is likely be match-fit after the October international break.

He will wear the number nine shirt, rather than the 11 he donned in his previous spell.

Bale left the north London club in 2013 for a then world record €100 million and went on to win four Champions League titles and two La Liga crowns, scoring more than 100 goals.

After a falling out with Real manager Zinedine Zidane, however, Bale has found himself marginalised and now says he is hungry to pull on the number nine for Spurs.

"This is such a special club," Bale, who scored 56 goals in 203 appearances for Tottenham after signing as a willowy teenager from Southampton in 2007, told the club's website.

"I always thought that when I did leave I would one day love to come back and the opportunity has arisen. I feel like it's a good fit, a good time in my career.

"I'm hungry and motivated and want to do well for the team and I can't wait to get started."

Bale, the Premier League Player of the Season in his last season at Spurs, was part of the squad when Tottenham last won a trophy, although he did not feature in the 2007-08 League Cup final victory over Chelsea.

While he was gathering silverware in Madrid, Tottenham have twice gone close to winning the Premier League and also reached the Champions League final but the trophy wait goes on. 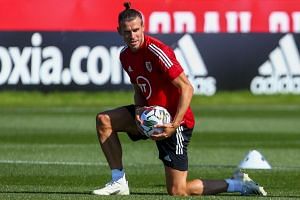 "I hope I can get some match fitness and get underway and really help the team and hopefully win trophies," Bale said.

"By going to Real Madrid and winning trophies and going far with the national team I feel like I have that winning mentality. It's something you don't realise until you are there.

"In finals, you know how to deal with the nerves and the pressure. That experience I hope I can bring to the dressing room, bring a bit more belief to everyone that we can win a trophy.

"Since I've left the club has been building and growing. It's an exciting time for everyone. I want to contribute again to get us to the next level to win a trophy.

"To win trophies is all we want to do as players and to do it for Spurs would be a dream come true."