With the 48 points she earned for winning the junior (Under-20) foil title at the Asian Junior and Cadet Fencing Championships in Amman, Jordan last week, the 18-year-old shot to the top of the charts with 154 points, one ahead of Italy's Martina Favaretto.

"This is a historic achievement for a Singaporean fencer and it comes as no surprise that Amita is the one to carve out this new milestone for Singapore.

She has in recent years consistently delivered good results on the regional and world stage, through cadet and now junior ranks.

"As a freshman at the University of Notre Dame in the United States, she continues to make waves on the Atlantic Coast Conference (ACC) circuit, winning the ACC individual title last month while also a member of the winning team.

"We congratulate Amita on this achievement, and also applaud the team behind her, namely her primary coach Ralf Bissdorf and her mum Uma. 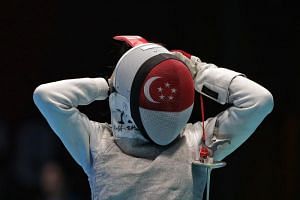 Fencing: It's all in the mind, says teenage fencer Amita Berthier as she wins second Junior World Cup title

"We at the FS secretariat are pleased that Amita continues to demonstrate that it's possible for Singapore athletes to dream big and achieve."

She will carry the world No. 1 ranking into next month's World Junior Championships in Torun, Poland.