The announcement, made during a press conference on Thursday (June 13), saw the 36-year-old sitting at a table, tears brimming in his eyes.

"Today, everyone know more or less my intention for calling this press conference. I would like to announce that I'm retiring from the sport after 19 years," he said at the packed press conference at the Menara KBS in Putrajaya.

"It was a tough decision to make but I was left with no option after my recent consultation with doctors in Japan last month."

"I was given eight questionnaires to answer about my conditions and the outcome came out to show that I'm not fit to do high-intensity activities. So it's not suitable for me to exert myself for the sake of my health."

"I want to thank you, Malaysians."

"I want to thank a lot of people, KBS (Ministry of Youth and Sports), ISN (National Sports Institute). I want to thank all my coaches, Datuk Misbun Sidek, Datuk Tey Seu Bock."

He also thanked his wife Wong Mew Choo, herself a former badminton player who won two SEA Games singles golds, and his two young sons Kingston and Terrance. He added that he would now like to rest and spend time with his family, and even take his wife on a "honeymoon", a trip that had been delayed since their marriage in 2012.

It is believed that Lee decided to step down to avoid a relapse of cancer. He had been diagnosed with nasal cancer in July last year and underwent treatment in Taiwan before returning to training in January.

One of the best Malaysian players to grace a badminton court, he etched his name in national folklore by claiming three Olympic silver medals and three runner-up finishes at the World Championships.

He was second at the Beijing (2008), London (2012) and Rio de Janeiro (2016) Games and also fell at the final hurdle in three World Championships outings in London (2011), Guangzhou (2013) and Jakarta (2015). Of those six losses, four were at the hands of Chinese superstar Lin Dan, arguably the greatest player of his generation. The last two defeats were by another Chinese, Chen Long.

Since his return in January, however, Lee's training stints have not been consistent and he has not been seen on the badminton courts for the last six weeks.

He had initially wanted to return for the All-England tournament in March and the Malaysian Open in April but his doctors advised against it. Then came news that he would not represent Malaysia in the Sudirman Cup and would also skip the World Championships in August, as he did not qualify on merit, with two higher-ranked teammates claiming the two slots.

His retirement will come as no surprise, as he has not played competitively for almost a year. Time is also running out for him to make a comeback to the international stage, as his one-year ranking protection privilege will expire on Aug 14.

Without that privilege, Lee, now ranked 190th in the world, will not be eligible to play in the top-tier World Tour tournaments, which offer crucial Olympic qualification points.

Lee had already made it clear that next year's Tokyo Olympics was the only reason he had deferred his retirement.

Besides his status as a "perennial bridesmaid", the other major blip in his career was his doping ban in 2014. He tested positive for dexamethasone at the World Championships that year and was later stripped of his silver medal. He was also slapped with an eight-month ban although this was backdated to the time the positive result was made known to him. 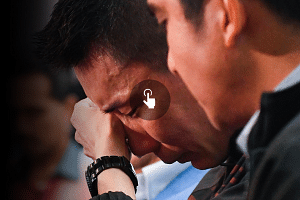 Such is his status in the sport and country that the Badminton Association of Malaysia (BAM) live streamed the "special press conference" on its Facebook page.

Even before the press conference, which began at about 12.30pm, tributes had been flooding in on Twitter, with many thanking him for his service to the sport and his country. The hashtag #TQChongWei was heavily used on the social media site.

Added Cherish Leow (@cherish-leow): "Many thanks for your commitment, time and effort all these years @LeeChongWei #TQChongWei."