SINGAPORE - I am not a big embracer of slogans or messages and the like.

But after completing 10km - my first attempt at this distance - at the Great Eastern Women's Run on Sunday (Nov 12), I have to admit that making a breakthrough is indeed empowering. (One of the key messages of the Great Eastern run is that it has been championing and empowering women to live healthier and better).

Of course I didn't win the race and I am quite sure my time of 1hr 32min 36sec put me well in the back half of the field but there is nothing quite like the bragging rights that come with the ability to say, "I did it!"

I had heard a lot about the Great Eastern run, with many past participants telling me that I was in for a good experience because it is one of the most well-organised runs in town. But that did little to ease my anxiety.

After all, I knew my preparation had been less than ideal. I was well aware that running 8km once a week on a treadmill in an air-conditioned gym is vastly different from running on roads and in an outdoor (read hot) environment.

But as I began to ease into my stride, my confidence grew, because I was not alone. The 13,000 participants came in all shapes and sizes; wore caps, tudungs, leggings, short shorts, bermudas. Not all ran. Some walked and many, like me, did a run-walk. But we moved as one tribe.

Key for me perhaps is that it was a women-only affair and therefore less harried. There was no one breathing down my neck, pushing roughly past me, as I plodded along slowly, keeping carefully to the left as per pre-race instructions.

That is not to say that I breezed through the course. Far from it. Among the mistakes I made was to drink too much at one point and then feel sick after it. Towards the last two kilometres, I also had to speed up despite my fatigue. Not because there were more photographers lining the route then and I wanted to look good for the cameras (although it was a consideration) but dark clouds were hovering over the course (five minutes after finishing, it started to drizzle).

I also failed to achieve my aim of finishing in 1½ hours. I otter have done, but there was a small matter of one of them polishing off its breakfast right in front of us just past the 4km mark. It was too good an opportunity not to get a photo and video in (all right, all right, I also needed a breather at that point).

Completing 5km at The Straits Times Run in July was an incredibly proud moment but there is just that bit more pride this time in finishing something considered more than a fun run. 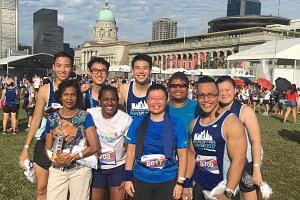 Have I arrived as a serious runner? Of course not. I still have a long way to go and I don't even know if I will ever get there. But running is about putting one foot in front of the other, and taking it one step at a time. Even if they are baby steps.

See you next year!