When The Straits Times visited wet markets in Telok Blangah, Geylang Bahru, Amoy Street, Toa Payoh West and Potong Pasir in the morning, many fishmongers had closed their stalls.

Stallholders selling fresh fish and seafood at markets managed by the National Environment Agency (NEA) or operators appointed by the agency have to receive a negative polymerase chain reaction test result before they can open for business, NEA and the Ministry of Health had said on Sunday.

This followed the detection of Covid-19 cases linked to the Jurong Fishery Port cluster at several wet markets here. The cluster recorded a total of 454 linked cases as at Wednesday.

Some of these markets have also made it mandatory for visitors to use the TraceTogether contact tracing app or token. It was earlier announced that check-ins would be made mandatory at wet markets and hawker centres progressively.

For instance, Geylang Bahru market has been fenced off with orange plastic mesh, leaving only an entrance and an exit. At the entrance and exit points, a safe distancing officer was seen enforcing the use of TraceTogether to check in to the venue.

It was a similar set-up at two other wet markets that ST visited: Block 201C Tampines Street 21 and Telok Blangah Crescent Block 11 Market and Food Centre.

Ms Jean Tan, 48, who visited Telok Blangah market, said she feels safer with TraceTogether check-ins being enforced. Ms Tan, who works part-time in the food and beverage industry, said: "The authorities will be able to track who goes where, because you don't know who is infected."

Hawker centres and coffee shops were also quieter on Thursday, the first day the no dine-in restriction kicks in. Patrons can only take away purchased food.

Additionally, the maximum social group size has been reduced from five to two people. When ST visited five hawker centres and two coffee shops in the morning, people were mostly in pairs or moving about alone - even though short queues were seen at some stalls.

At Telok Blangah Crescent Block 11 Market and Food Centre, half of the food stalls were closed. Two safe distancing ambassadors were seen patrolling the area.

Stallholders said that the usual crowd had thinned as people were afraid to go out amid the rising number of Covid-19 cases in the community.

Mr Abdul Aziz, owner of Aziz and Family Malay Food at the food centre, said: "The situation is getting worse now. I can't blame anyone, but I hope the Government can give us more help."

He said he expected to earn only about 30 per cent to 40 per cent of what he would on a "normal" day.

A dessert seller at Tiong Bahru Market and Food Centre, who wanted to be know only as Madam Cheng, said her business had fallen by 20 per cent to 30 per cent on Thursday.

She said: "Most of our customers dine in. There aren't many customers around now. People don't dare to go out after hearing about the Covid-19 clusters at markets."

Others expressed frustration with what they called "constant" reintroduction of restrictions.

Student G. Shaamini, 21, said she was not looking forward to spending her school holidays under the stricter rules. She was at Toa Payoh West Market & Food Centre in Lorong 1 to buy food.

"A month ago, the Government said that it had confidence that we could continue with our lives despite the number of daily cases but, within a month, we are back to square one. So I don't know under exactly what kind of conditions will we be able to continue our lives normally even with clusters and growing cases," she said. 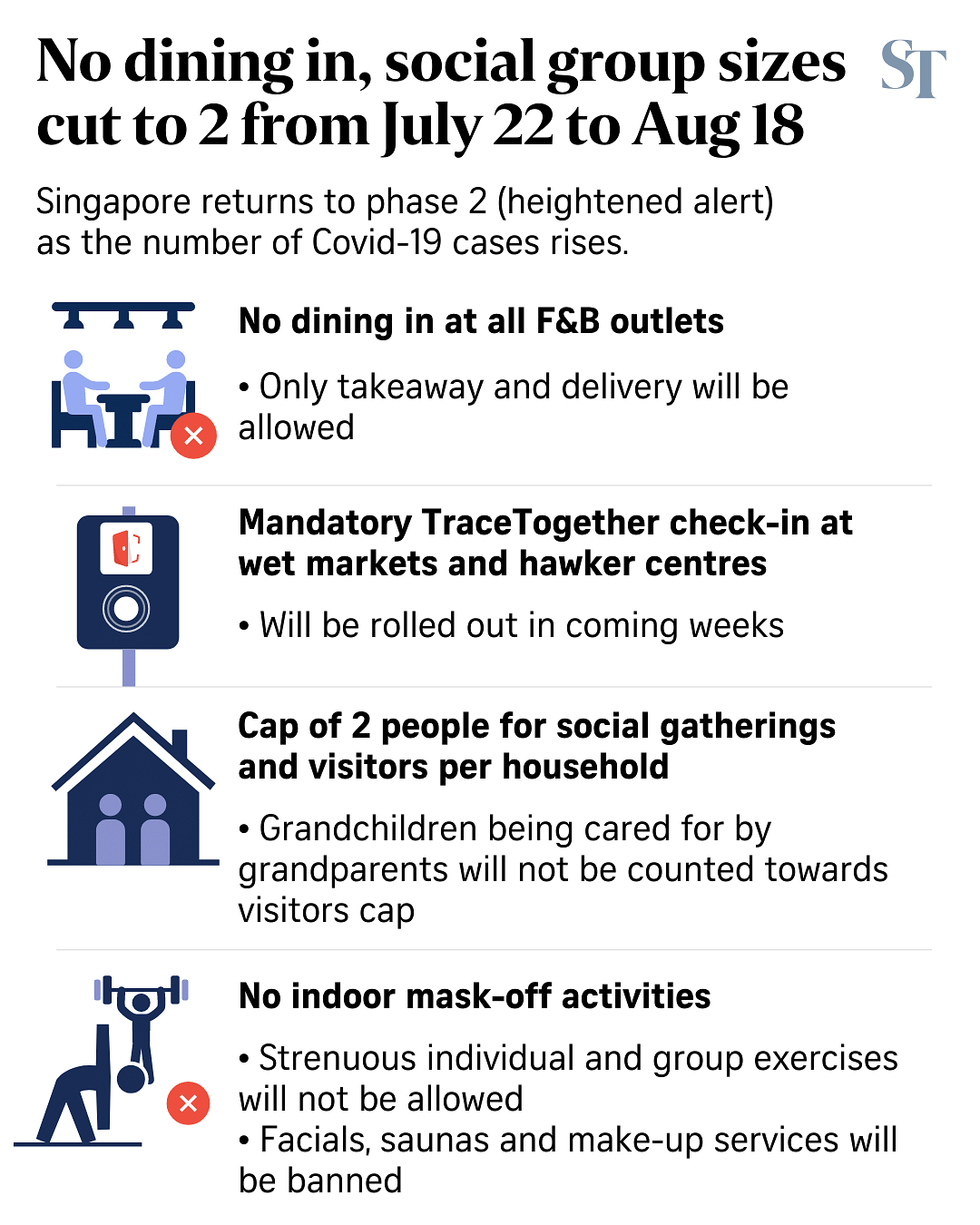 All quiet at wet markets as more Covid-19 cases detected among stallholders, assistants