As Singapore prepares to ramp up security on Sentosa Island ahead of Tuesday's historic summit between United States President Donald Trump and North Korean leader Kim Jong Un, some of those who live, work and operate tours on the resort island say they are concerned about how the security arrangements will affect them.

Businesses said that June is the beginning of the peak period for Sentosa, which attracts some 19 million visitors annually.

Some are expecting a drop in business from Sunday, while others are anticipating a bigger crowd and planning for additional manpower.

Capella Singapore is the venue for the summit between Mr Trump and Mr Kim, who is Chairman of the State Affairs Commission.

Sentosa Island and waters off its south-west beaches have been declared a "special event area" from June 10 to 14, during which certain activities will be restricted and those entering may be subject to security checks.

Ms Charlene Low, manager at Hard Rock Cafe in Resorts World Singapore, said: "I expect people coming in to Sentosa to have plenty of delays, so business may be affected a little." 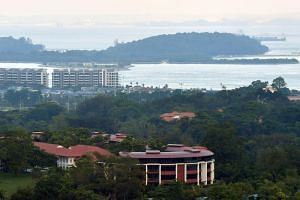 "This period has been quiet as many of the expat residents have gone home for the summer. Hopefully, this event will bring more tourists to Sentosa and the (Sentosa) Cove," she added.

Tour operators said tours to Sentosa will go on for now, though movements of the two leaders within the island may disrupt itineraries. Freelance tour guide April Lim said: "We don't know if suddenly, areas or attractions will be closed off one day before."

Managing director of Star Holiday Mart Dominic Ong said itineraries will be adjusted slightly due to the expected delays. "There will be much tighter security and my tour guides will probably have to work longer hours because of all the delays."

Hotels in the area said that disruption to their guests is expected to be minimal, and bookings have remained stable.

A spokesman for Amara Sanctuary Resort Sentosa, located down the road from Capella, said that staffing will be increased and guests will be informed to factor in longer travelling time when planning their journeys in and out of Sentosa.

Residents said they would also be planning for possible traffic jams around the island. Sentosa Cove resident Margaret Siew, 52, said her 10 to 15 minute journey to the mainland will likely be doubled during the summit period.

"My family and I like to go out for runs and cycling in the area, but I imagine that won't be possible in the coming week especially because we wouldn't carry our IDs with us," said Ms Siew, a director of consulting.