SINGAPORE - Strict security measures will be in place in key areas across the island next week, especially in Tanglin and Sentosa.

These two areas have been declared “special event areas” for the June 12 summit between United States President Donald Trump and Mr Kim Jong Un, who is Chairman of the State Affairs Commission of North Korea.

The summit is to take place at the Capella Singapore hotel on Sentosa.

Observers say Mr Trump is likely to stay at the Shangri-La Hotel, and Mr Kim at The St Regis Singapore. Both hotels are in the Tanglin area.

Speaking to the media at the Police Headquarters in New Phoenix Park, Senior Assistant Commissioner How Kwang Hwee, operations director of the Singapore Police Force, said on Wednesday (June 6) that the police have been working closely with advance security teams of both countries to develop and put in place plans for the summit.

Members of the public can also expect to see more boots on the ground, with the police, Home Team agencies, Singapore Armed Forces and auxiliary police being deployed.

"During this period, the public can expect heightened security measures to be put in place at the summit and areas around it," added SAC How. 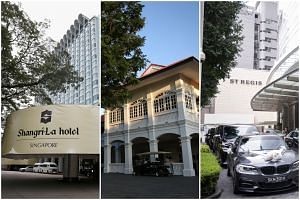 Trump-Kim summit: Spotlight on 3 hotels where all the action will likely take place

The venue for the June 12 summit at the Capella hotel was announced in a tweet at around 12.30am on Wednesday by White House spokesman Sarah Sanders, putting to rest speculation on the confirmed meeting place.

On Tuesday, the Singapore Government declared Sentosa island and the waters off its south-west beaches a "special event area" from June 10 to June 14. Earlier, on Sunday, it gazetted for an area in Tanglin to be placed under similar restrictions.

People, vehicles and vessels entering the gazetted areas may be subject to bag and body checks, while items such as flags, banners and flammable materials will not be allowed.

A "special zone", where checks will be even stricter, has been marked within each area.

On Sentosa, the Capella hotel is located within this smaller zone.

And within the Tanglin area, Shangri-La and St Regis hotels sit within the zone.