The airline earlier said that it plans to start flying non-stop to Newark – near New York – in October.

"We are looking at where else (in the US) to fly to," Mr Goh told reporters on the sidelines of the International Air Transport Association (Iata) annual general meeting in Sydney.

SIA will operate the non-stop flights to Newark Liberty International Airport and LA with its new Airbus A350-900ULR ultra-long-range aircraft.

With seven of the planes coming by the end of March 2019, the airline will have to look for more points in the US to fly to, Mr Goh said.

"Seven aircraft is probably more than what is needed for New York and LA," he added.

In October 2016, the airline started flying non-stop between Singapore and San Francisco – a service that can be operated with the A350-900 aircraft and does not require the ultra-long-range variant.

Asked if the airline will continue to fly to LA via Tokyo and Seoul when non-stop flights to the US city begins, Mr Goh said: "The structure of our US network will obviously have to be relooked, and what the implications are will be announced."

The flight to Newark will offer 67 business class and 94 premium economy seats and cover a distance of more than 15,000km, with a flight time of just under 19 hours.

For a start, the Singapore-Newark flight will operate three times a week from Changi Airport on Mondays, Thursdays and Saturdays. Daily operations will start from Oct 18 when an additional aircraft comes into service.

The flight will see SIA reclaim the title of running the world's longest non-stop flight - an honour it held with its Singapore-Newark flight from 2004 to 2013.

For SIA, the launch of the Singapore-New York service will mark a significant milestone in the resumption of its non-stop flights to the US, which the airline axed in 2013 after about a decade of operations. 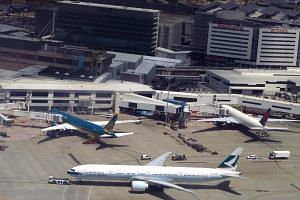 Got 19 hours to spare? SIA to launch world's longest commercial flight to New York on Oct 11

The flights to Newark and Los Angeles were started in 2004, but the 2008 global financial crisis, coupled with rising fuel prices, made the routes unsustainable.

At the time, SIA operated the routes with the four-engine Airbus A340-500.

Currently, Qatar Airways – which operates an 18-hour flight from Auckland, New Zealand, to its home in Doha – operates the world's longest non-stop flight.

Coming in at a close second is United Airlines' Los Angeles to Singapore flight at just under 18 hours.

Third is Australia's Qantas, which recently launched a Perth-London service that gets passengers to Britain in 17½ hours.

While there is clearly a demand for ultra-long-haul flights, especially from business travellers, airlines will continue to also offer one-stop flights, industry experts said.

"When combined with the option to travel and work for a longer period uninterrupted by having to change aircraft, it makes a strong case for ultra-long-haul flights to be a direct contributor to a more effective workforce."

Still, there will always be those who prefer to have their journeys broken up by a stopover in between, he said.