That is the length of a new flight between Singapore and Liberty International Airport in Newark, New Jersey.

Service on what Singapore Airlines says will become the longest commercial flight in the world begins on Oct 11. The flights will be daily beginning on Oct 18.

Contrast that to the shortest regularly scheduled commercial flight, a 1½-minute hop between Westray and Papa Westray, two islands north of the Scottish mainland, by Loganair.

Singapore Airlines will be the first airline to use Airbus' A350-900 ULR (for ultra long range) planes, which have extra fuel capacity, are made of a carbon fibre that is lighter than the aluminium of traditional jets and burn less fuel because they have only two engines, compared with the four on many other long-haul jets.

The flights will have 161 seats - 67 in lie-flat business class and 94 in premium economy, which uses bigger seats that have more legroom than traditional coach seats, but do not have the ability to become a bed.

The non-stop flight is primarily meant to appeal to business travellers, which is why Newark airport was chosen as the New York gateway.

It gives the airline easy access to business customers in Manhattan and in northern New Jersey.

"The non-stop flight length is at least about two to three hours shorter than the one-stopper, maybe even four hours," in terms of door-to-door travel time for most customers, said Mr Mak Swee Wah, the airline's executive vice-president, commercial.

The company has not yet released pricing information.

But on a flight that long, passenger comfort is a big issue.

"The thing that the passengers view as most important will be comfort," Mr Mak said.

To that end, the airline is specially tailoring its in-flight meal service for the route.

The exact schedule and menu options are still being decided, but the airline said that meal service on such a long flight takes more planning and orchestration than on shorter routes.

As on other Singapore flights, travellers will be able to personalise what they watch with their seat-back entertainment system.

Ahead of their flights, passengers will be able to create a playlists of movies, television shows and music that will be available onboard.

Because the plane is not made of aluminium, which is more susceptible to corrosion than carbon fibre, the cabin can be kept at higher humidity.

A350 cabins are also pressurised at a lower altitude than usual, so passengers feel as if they are flying at only 6,000 feet (1828.8m). Most airplanes are pressurised to 8,000 feet. 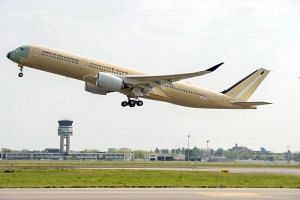 Qantas launches Perth-London route: The longest flights in the world

The cabin features an LED lighting system that can mimic different times of the day, helping customers combat jet lag before they even reset their watches or sync their phones to a new time zone.

"What makes the airplane perfect for this kind of mission, first of all, is that it's capable of doing it," said Ms Marisa Lucas Ugena, Airbus' head of A350 product marketing.

"The key factor for Singapore Airlines is that this aircraft is extremely efficient. It's allowing them to reopen this service and make money on it."

The airline previously flew non-stop service on Airbus A340-500s between Newark and Singapore from 2004 to 2013.

Beginning in 2008, the flight carried 100 business class seats. Before that, it was a two-class configuration, more similar to the layout planned for the October reboot.

"It was a product that was very well received," Mr Mak said. "Unfortunately, the economics at that time were challenging. The A340 was not the most efficient plane, and a number of other factors made it not economical to carry on."

Those Airbus A340s were configured to make the New York-to-Singapore flights possible and relatively cost-effective, but that meant it was not economical to use them on any other routes.

"Being part of the larger pool makes the economics of the operation more sound," Mr Mak said.

In recent years, there has been a surge in ultra-long-haul flights as low fuel prices and new aircraft that are lighter weight and more efficient have made them cheaper to operate than before.

Ten years ago, there were 10 ultra-long-haul flights, according to Mr Samuel Engel, the senior vice-president of aviation at the consulting group ICF.

Today, there are 23 such routes in service, with more set to start in the coming months.

He considers a flight to be ultra-long-haul if it travels more than 12,874km non-stop or takes more than 15 hours.

"This really is a case of the technology opening up new possibilities to the economics," Mr Engel said.

And people have always been fascinated with the idea of travelling to far-off places, he added.

"We're partly fascinated by the magic of being able to teleport yourself to Kowloon, as it were," he said, referring to the area of Hong Kong, "in a good night's sleep and a movie."