This comes a week after Telepod, another Singapore-based start-up, was charged with the same offence under the Parking Places Act.

Under the Act, PMDs cannot be offered for hire on public land without a licence or an exemption from the Transport Minister.

Unlicensed operators can be fined up to $10,000 and jailed for up to six months, or both.

There is a further fine of $500 for each day that they continue to operate after conviction.

The LTA noted that as of Feb 25, it had impounded 144 Neuron Mobility PMDs, which had been made available for hire in public places illegally.

"This was after LTA's repeated written warnings to Neuron Mobility that it should not make PMDs available for hire without a licence or prior exemption," said a spokesman for the authority. 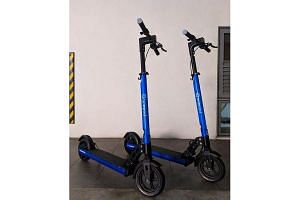 Telepod and Neuron Mobility have both been operating here for about two years, though this was under an exemption that allowed their devices to be used - without a licence - in specific areas under an agreement with land owners.

Earlier this month, both firms were among the 14 companies that applied to offer PMD-sharing services in Singapore under the LTA's device-sharing licensing scheme.

The licence caps the number of devices a firm can operate here and requires it to take measures to curb indiscriminate parking.

"LTA would like to remind all operators that when evaluating licence applications, LTA will consider their track record, including their compliance with the law and regulatory requirements," said the authority.

PMD-sharing services, offering devices such as e-scooters, have taken off internationally in the last two years.

Lime and Bird - two firms from the United States offering such services in a number of countries - are reported to be valued at about US$2 billion (S$2.7 billion) each.