SINGAPORE – Two local personal mobility device (PMD) sharing start-ups have run into trouble with the authorities, while awaiting approval for a licence to operate their services in Singapore.

On Thursday (Feb 21), the Land Transport Authority (LTA) said that as of Feb 14, it had impounded 68 PMDs from Telepod and another 131 such devices from Neuron Mobility, which had been illegally made available for hire in public.

Telepod has been charged in court under the Parking Places Act, which prohibits PMDs from being offered for hire on public land without a licence or an exemption from the Transport Minister.

Unlicensed operators can be fined up to $10,000 and jailed for up to six months, with a further fine of $500 for each day they continued to operate after conviction.

“Repeated written warnings” had been issued to Telepod, the authority said.

Investigations against Neuron Mobility have also been completed, the LTA noted, adding that the firm will be charged in court at a later date for the same offence. 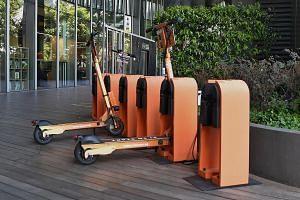 Earlier this month, Telepod and Neuron Mobility were among the 14 companies that had applied to offer PMD-sharing services in Singapore under the LTA’s device sharing licensing scheme.

The licence caps the number of devices a firm can operate here and requires them to take measures to curb indiscriminate parking.

While both Telepod and Neuron Mobility have been operating in Singapore since 2017, this was under an exemption which allowed their devices to be used without a licence within specific areas under an agreement with land owners.

“LTA would like to remind all operators that when evaluating licence applications, LTA will consider their track record, including their compliance with the law and regulatory requirements,” said the authority.

In November last year, the LTA said it had impounded 42 shared e-scooters – almost all from Telepod and Neuron Mobility – over a four-month period.