SINGAPORE - A closer look at the tunnelling work that takes place 28m underground, how train cars are joined together, and the tasks that construction workers carry out.

Such scenes and more are depicted in the photos on display at Bugis and Orchard MRT stations from Friday (Feb 1).

The Land Transport Authority (LTA) and Canon Singapore collaborated on the exhibition, titled Show The Full Picture, of about 40 photos on the construction works for the upcoming Thomson-East Coast Line.

Senior Parliamentary Secretary for Transport Baey Yam Keng, who was at the launch of the exhibition in Bugis, said: "I think this exhibition really gives the public a glimpse into the work behind the scenes - the long hours, the kind of challenging environment, and the danger.

"This is also a tribute to our engineers and workers for their hard work."

Commuters can see the photos at Bugis and Orchard until Feb 27 and March 31 respectively.

The photos will also be displayed at the Bedok, Tampines, Dhoby Ghaut, Bedok Reservoir, Paya Lebar, Bencoolen and Woodlands stations before end-May. 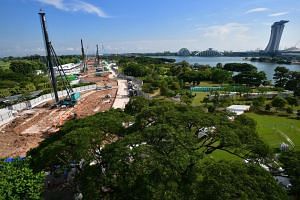 This exhibition is a follow-up to the Those Who Move Us exhibition in 2015, which showcased the work done to maintain Singapore's public transport system.

The 13 professional and amateur photographers captured the images during a series of five photo clinics held at Katong Park, Mayflower, Orchard and Woodlands stations, as well as Mandai Depot on the Thomson-East Coast Line.

One of the photographers, Mohd Yusof Noor, 43, who works as a senior tech executive, said his respect for the workers greatly increased after documenting them at the Katong Park site.

"The kind of environment they work in, working in a tight space... It's very physical, not everybody can do it," he said.

Mr Baey, who is also a Member of Parliament for Tampines GRC, also told The Straits Times on the sidelines of Friday's event that an appeal has been filed with the Housing Board to keep an unusual koi fish tank in Tampines Street 41 which had made the news.

An HDB flat owner had converted the doorstep of his property into a fish tank for his koi collection but was last month asked to remove the structure due to safety concerns that it "could potentially lead to injuries or fatalities".

These concerns include the risk of the glass tank shattering or children climbing into the tank.

Mr Baey said the town council had worked with the resident to try to address HDB's concerns, and that a decision on the issue is expected after Chinese New Year.