SINGAPORE - Chinese bike-sharing firm ofo has earned a stay of execution here after it was given more time to remove its bicycles from public spaces by the Land Transport Authority (LTA).

The firm's licence to operate here is currently suspended for not meeting LTA regulatory requirements.

It was due to be cancelled if ofo did not remove its bikes from public spaces by Wednesday (March 13).

However, in a statement on Thursday, the LTA said: "Ofo has requested for more time to remove its bicycles from public places as ofo headquarters has informed LTA that it is in advanced stages of negotiations to partner ofo Singapore with another party.

"In addition, since Feb 14, ofo has shown progress in implementing the QR code system. LTA has therefore acceded to ofo's extension request.

"During this extension, ofo's licence will continue to be suspended."

The LTA added that it will cancel ofo's bike-sharing licence if ofo "eventually does not fully comply with licence requirements". 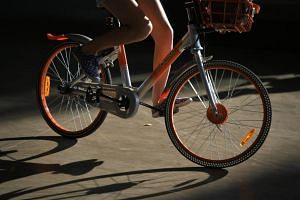 Mobike applies to LTA to withdraw from Singapore

It did not specify a date when the extension will end.

Ofo's licence was suspended last month after it missed a deadline to meet LTA's regulatory requirements. It failed to introduce a QR code-based parking system that would allow its bicycles to be parked only within specified areas, and it did not update its app to allow for the banning of users who repeatedly park outside the designated areas.

LTA said then that it "will only lift the suspension if ofo meets all regulatory requirements".

Should ofo's licence be cancelled, it would lose the right to operate bike-sharing services in Singapore, which would make it an unattractive proposition for any potential buyouts.

Unlicensed operators can face a fine of up to $10,000 and/or a jail term of up to six months, with a further fine of $500 for each day the offence continues after conviction.

The firm's stay of execution comes after fellow Chinese firm Mobike's decision earlier this week to withdraw from the Singapore market.

The developments will leave local firms SG Bike and Anywheel as the only viable operators here. They operate a combined fleet of 4,000  bicycles.

Anywheel founder Htay Aung said it has been approached about taking over Mobike's licence to run 25,000 bikes. The firm is now having internal discussions about the proposal.

The suspension of ofo's licence capped the firm's rapid fall from grace, both in Singapore and overseas.

Ofo has been operating in Singapore since early 2017, with more than 90,000 bikes deployed here, according to a former employee.

It was the largest bike-sharing company in the world, and had 10 million bikes in over 250 cities at one point last year.

Its prospects looked rosy when it secured US$866 million (S$1.17 billion) in March last year from backers including Chinese e-commerce behemoth Alibaba Group.

But reports emerged late last year that ofo was battling "immense" cashflow problems and that it had considered disbanding as an option.

The company has not shown any sign of a turnaround since.