From Thursday, commuters with Mastercard contactless bank cards will simply be able to tap and go when paying for their fares on buses or trains.

This is part of the Land Transport Authority's (LTA) SimplyGo initiative, which will be launched for Mastercard cardholders first before possibly being expanded to include Visa cardholders later this year.

LTA in a statement yesterday said commuters can use their Mastercard contactless bank cards or mobile phones to pay for travel without the need to carry a separate travel card or make top-ups upfront.

They can tap their contactless bank cards on the fare reader at the MRT station gantry or when boarding and alighting the bus, and they will be charged the same fares as those using ez-link or Nets FlashPay cards.

Those with foreign-issued bank cards may be charged administrative and overseas transaction fees.

SimplyGo can also be used on devices with Apple Pay, Fitbit Pay, Google Pay or Samsung Pay. Commuters will have to link their Mastercard cards to their mobile devices.

SimplyGo commuters can also view their travel expenditure and history by registering for an account on the TransitLink SimplyGo portal online or through its mobile application.

The SimplyGo account also allows users the option to receive information on their travel expenditure and history via push notifications on their mobile phones at the end of their trip. 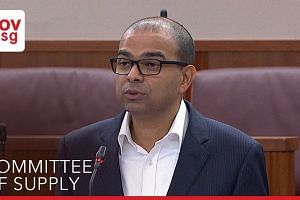 The mobile app also contains details on concession card applications as well as bus routes and timings, among other features.

The LTA said that more commuter services will be rolled out in the app in the future.

Mastercard users who are already using the built-in ez-link or Nets FlashPay function of their contactless bank cards can do a switch of payment mode at a general ticketing machine if they want to opt for Mastercard contactless payment.

Once the switch is done, all fares paid using that card will be processed, accumulated and charged to their card account.

The LTA, together with TransitLink and Mastercard, will be conducting SimplyGo roadshows at various MRT stations from Thursday to the end of the month.

Towards the end of the year, commuters using their ez-link cards can also upgrade their cards to enjoy SimplyGo benefits, such as topping up on the go via their SimplyGo account, the LTA said.