SINGAPORE - For the rail system to be highly dependable, a "virtuous cycle" has to be formed between operator, regulator and manufacturers.

Citing the recent supply of 66 replacement trains for the North-South and East-West lines - which was bundled with a lifetime maintenance programme - Mr Khaw said the approach would ensure that train manufacturers "had the right incentives to deliver a well-designed asset that is easy to maintain, not susceptible to failure, and minimises the overall life cycle costs".

"This will feed into a virtuous cycle for the downstream operations, maintenance and system reliability of our train fleet," he added.

Mr Khaw also raised the possibility of paring down the number of trains and systems so that engineers need not spread their expertise thin.

"As our rail network becomes more extensive, we need to think about greater standardisation across the rail system," he said. "By 2030, we will have eight MRT lines. Is it wise to have eight different system providers for signalling, another eight for trains, another eight for power and so on?

"If we do that, our engineers will need to learn eight different systems, multiplied by many different assets. This is not a good use of our engineering talent. It also prevents us from exploiting economies of scale." 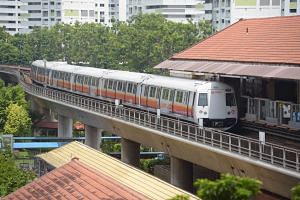 Bus and train fares to rise by 6 cents per trip from Dec 29: PTC

North-South and East-West lines to get 66 new trains

Instead, Mr Khaw said, "we should be looking to forge an optimal number of strategic partnerships that balances competitiveness and contestability with optimising standards in our local rail industry".

There are currently about a dozen different types of trains plying the network run by two operators here.

While the new approach ropes in manufacturers for maintenance, Mr Khaw said it was still crucial for Singapore to garner "deep engineering expertise... through close working relationships with our strategic partners".

"This is a priority for Singapore, and it will increasingly feature in our future procurement," he noted. "It takes two hands to clap - just as we invest and put our trust in our strategic partners, our partners must invest in us and have a stake in Singapore."

Reiterating that rail reliability is a national priority, he said suppliers must see the benefit of being aligned with this priority.

"At the end of the day, when Singapore succeeds, our strategic partners succeed together with us," he said, adding that if they meet the high standards here, they should be able to succeed anywhere else too.