From 6am, it draws steady stream of locals, as well as arriving and departing travellers

He had a 10-hour wait before his next flight, but Mr Sammy Estaban was not complaining.

The 27-year-old Filipino, who works in South Korea, had in fact planned his trip back home to coincide with the opening of Jewel Changi Airport yesterday.

He said of the 10-storey complex that has more than 280 shops and eateries, as well as attractions that include a 40m-high indoor waterfall: "I don't think I need to go anywhere else for food and shopping."

Before the official opening yesterday, a six-day public preview which ended on Tuesday attracted about 500,000 Singapore residents who had signed up for free tickets.

From 6am yesterday, when Jewel opened its doors, it drew a steady stream of local visitors, as well as arriving and departing travellers.

Despite some earlier concerns, traffic flow to the airport was not significantly affected by the opening of Jewel.

Early check-in for 60% of flights

Located where an open-air carpark used to be, Jewel is directly connected to Terminal 1, and linked to Terminal 2 and Terminal 3 via air-conditioned travelators. 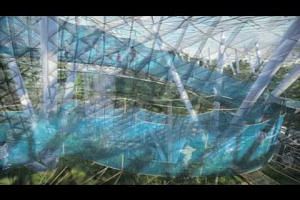 Dr Thomas Diffy, 27, who was travelling from Britain to New Zealand, said: "It's a nice addition; makes the airport more interesting."

Colombian engineer Camilo Soto, 37, liked the idea of nature and a big mall coming together. "It's something you can't find in other parts of the world."

Inside Jewel, there are more than 2,000 trees and palms, and over 100,000 shrubs, sourced from countries such as Australia, China, Malaysia, Spain, Thailand and the United States.

To make it convenient for travellers, 26 airlines, including Singapore Airlines, SilkAir, Scoot, Qantas and Emirates - representing 60 per cent of departing flights at Changi - offer early check-in at Jewel.

More airlines are expected to come on board in the coming weeks and months. By 6.30pm, about 300 travellers had checked in for their flights at Jewel.

Those whose airlines do not offer early check-in at Jewel can still drop their bags off at a designated area in the complex. Once they are done shopping, eating and relaxing, they can collect their bags and proceed to check in for their flight.

Jewel, which took four years to develop at a cost of $1.7 billion, is a joint venture between Changi Airport Group and CapitaLand. The project was announced by Prime Minister Lee Hsien Loong in his National Day Rally speech in 2013.

With the demand for air travel in Asia expected to grow strongly in the coming decades and competition increasing among airports, Jewel is a key part of Changi's strategy to improve the airport experience and grow traffic.

Those who turned up yesterday included Singapore residents who did not make it for the public preview.

Mr Foo Mao Sheng, 30, a museum curator who lives in Choa Chu Kang arrived at 9am to check out the Pokemon Centre. He said: "I will come back. The surroundings are very nice and the atmosphere relaxing."

Not everyone was impressed, though.

Recent business graduate Samir Chadha, 21, who was flying to Bangkok, described Jewel as "breathtaking" but added: "I don't know if I'd purposely come to Singapore just for this, though".