SINGAPORE - A year after taxis and private-hire cars were allowed to have inward-facing video cameras, the Land Transport Authority (LTA) said on Tuesday (July 2) that these cameras are also allowed to make audio recordings.

In a statement, the LTA cited a poll by the government feedback unit which found 90 per cent of respondents were in favour of such recordings.

The authority said having audio "makes the recordings more effective in supporting investigations into inappropriate or violent behaviour as well as fare-related disputes".

This new ruling will come into effect from July 15, along with a change which exempts buses from guidelines on recordings. The LTA said buses are in effect public spaces since they are shared by many people at any one time.

Taxi operators, ride-hailing firms and drivers who offer rides for payment (including some car-pool services) must obtain permission from the LTA to install inward-facing cameras.

And only three companies are authorised to install such devices for this purpose - i Vision Pte Ltd, Solo Pte Ltd, and SSTA Technology Development Pte Ltd.

All taxis and private-hire cars with such cameras must display signs informing passengers of their presence. For pre-booked rides, operators must also notify commuters in advance.

Only authorised personnel in relevant government agencies and LTA-authorised data controllers are allowed access to the recordings to support any investigation. Drivers are not allowed to use other devices such as mobile phones to make recordings in their vehicles. 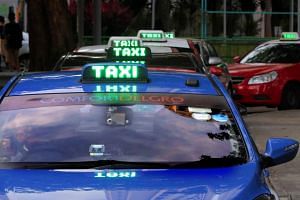 Unhappy with inward-facing cameras in private-hire cars, cabs? Too bad for passengers

The issue of inward-facing cameras goes back several years. In 2013, taxi giant ComfortDelGro installed such cameras in 4,000 of its 16,000 cabs to tackle fare evasion, deter assaults on cabbies and to help resolve disputes. But it had to dismantle them soon afterwards because of a public outcry over loss of privacy.

Commuter Olivia Choong, 40, said she feels "uncomfortable" about cameras with audio recording. "There goes our privacy," she said, but added that people will just have to get used to being recorded. "There is camera surveillance everywhere anyway."

Another commuter Geraldine Lam, 37,  welcomes the new move. “Buses and trains also have cameras, and the move does help to protect commuters as well,” she said. “But I’m not so confident if the safeguards in place to protect consumers’ privacy can be truly enforced.”

Singapore University of Social Sciences urban transport expert Park Byung Joon said if the cameras are  only for tackling fare evasion, “it is an overkill”. But if they are an added security measure, “I have no problem with that”.

The Personal Data Protection Commission said people who do not want to be recorded can choose not to use the transport service which has these devices.