SINGAPORE - Raffles Place MRT station was hit by a freon gas leak on Monday (May 1) night, which caused a train to be filled with what appeared to be "smoke".

A video taken by an eyewitness and sent to citizen journalism website Stomp showed the gas engulfing the platform at around 8.45pm.

In response to queries, SMRT's vice-president for corporate information and communications Patrick Nathan said on Wednesday that investigations showed the incident was caused by a leak from one of the train's air-conditioner compressors.

"The train was withdrawn from service to have the air-con compressor unit replaced. We apologise for any inconvenience caused," he added.

According to the eyewitness, it was very hot in the train when the gas appeared. 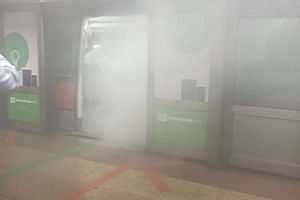 She added that commuters were also in a panicked state.

Freon gas is a common refrigerant used in air-cons. It is non-toxic and not flammable.

A similar incident occurred in August last year, when an oil leak in a train's air-con compressor caused a train at Tanjong Pagar MRT station to be filled with freon gas.

Transport Minister Khaw Boon Wan said in Parliament that the train was a first-generation model from Japanese manufacturer Kawasaki, with parts that are more than 20 years old.