Speaking in Parliament on Tuesday (Aug 16), Mr Khaw said preliminary investigations found that the oil leak resulted in the compressor overheating, which in turn led to the freon gas evaporating.

He was responding to Mr Sitoh Yih Pin (Potong Pasir), who had asked for an update on the incident.

Mr Khaw said engineers will examine the compressor to check what had caused the oil leak, noting that it was last checked about 10 days ago.

He said the train with the faulty compressor was a first-generation Kawasaki train.

"So the train and the air con compressors are all about almost 20-odd years by now and that's the trouble with old parts, sometimes little problems happen," he said. 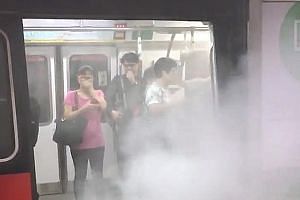 The incident on Monday had initially sparked fears of a possible fire in the station. Videos posted on social media showed commuters rushing out from what looked like a smoke-filled train.

Operator SMRT later said passengers were detrained, and its staff switched on the tunnel ventilation system to disperse the gas.

The train was withdrawn from service, and its air-conditioning system is being checked.