SINGAPORE - At least 17 flights due to depart on Tuesday (Dec 3) between Singapore and the Philippines have been either rescheduled or cancelled because of Typhoon Kammuri.

They include flights from Singapore Airlines, Scoot, Cebu Pacific Air and Jetstar.

Typhoon Kammuri hit the Philippines' main island of Luzon on Monday and about 500 flights were postponed and 100,000 people affected after all four terminals at Manila's main airport were closed as a precaution.

On Tuesday, a Jetstar spokesman told The Straits Times that typhoon winds caused the closure of Manila International Airport from 11am to 11pm on Tuesday which affected its flight 3K765 due to depart from Singapore's Changi Airport at 4.35pm.

"We will continue to monitor the situation closely and provide the latest information via our Travel Alert page," the spokesman said.

On Monday, Singapore Airlines (SIA) and Cebu Pacific posted travel advisories on their Facebook pages, while Scoot posted an announcement on its website, on flights that were affected by the typhoon.

All flights affected were between Singapore and Manila, with the exception of two Scoot flights to and from Clark city on Luzon, some 100km north from Manila.

In its Facebook post, the airline said that passengers on these flights will be transferred to the next available flight. They can choose instead to get a full refund, or rebook their flight within 30 days without penalties, or store the value of their air tickets in a travel fund for future use.

Affected Scoot customers can also get a refund of unused itinerary value in Scoot travel vouchers or rebook their flight on the same route up to two weeks from Tuesday at no additional charge. 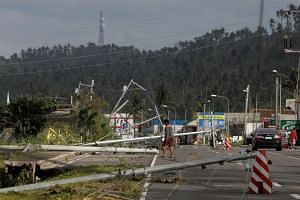 Customers of SIA, Scoot and Cebu Pacific were also advised to check the airlines' websites, or social media pages regularly for updates.

Other airlines that fly to the Philippines from Singapore include AirAsia and Philippine Airlines.

AirAsia told ST that while domestic flights within the Philippines have been affected by Typhoon Kammuri, there are no changes so far for flights to and from Singapore.

Philippine authorities evacuated tens of thousands of people as Typhoon Kammuri maintained its strength as it came closer to land in the main Luzon island, AFP reported on Monday.

Kammuri, named Tisoy locally, is packing maximum winds of 150kmh near the centre and gusts of up to 185kmh, the Philippine Atmospheric, Geophysical and Astronomical Services Administration said.

Typhoon Kammuri is the 20th tropical cyclone to enter the Philippines this year and follows a track similar to Typhoon Rammasun in July 2014, which killed 106 people in the South-east Asian nation and damaged properties worth 38.6 billion pesos (S$1.04 billion).

For the latest return of Typhoon Kammuri, at least one person died and more than 217,000 people fled their homes even before the typhoon hit the Philippines' Sorsogon province in south Luzon late on Monday.