Kammuri, named Tisoy locally, is packing maximum winds of 150kmh near the centre and gusts of up to 185kmh, the nation's weather bureau said.

The Philippines is hit by an average of 20 storms and typhoons each year, killing hundreds and putting people in disaster-prone areas in a state of constant poverty.

Typhoon Kammuri is the 20th tropical cyclone to enter the Philippines this year and follows a track similar to Typhoon Rammasun in July 2014, which killed 106 people in the South-east Asian nation and damaged properties worth 38.6 billion pesos (S$1.04 billion).

More than two dozen areas are on storm signal 3, the third-highest in a five-level warning system, before it hits land over Bicol region as early as Monday.

Under signal 3, wind of as much as 170 kmh – strong enough to topple coconut trees and destroy rice and corn crops – may be expected in 18 hours.

Metro Manila and a dozen areas are under signal 2.

The weather bureau also warned of rain-induced landslides and possible storm surges of up to three meters which could hit coastal areas in the nation’s east.

Philippine Airlines Inc and Cebu Air Inc suspended more domestic flights, schools are shut in several provinces and parts of Metro Manila on Monday, while more than 4,600 people are stranded in various ports. 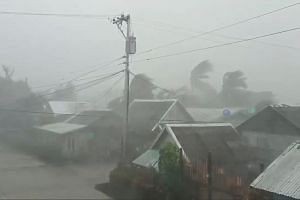 SEA Games: Some concern over Typhoon Kammuri but it's largely business as usual for Team Singapore

The storm can have a "high humanitarian impact," the Global Disaster Alert and Coordination System said on its website, putting a population of 8 million at risk.

Nearly 70,000 people have already fled their homes in the Bicol region, which is where the typhoon is expected to make landfall.

"We hope there won’t be any damage, but given its (Kammuri’s) strength, we can’t avoid it," Mr Mark Timbal, spokesman for the national disaster agency, told AFP.

"We have preemptively evacuated people in areas that are in the storm’s direct path."

The Philippines is hosting the 30th South-east Asian (SEA) Games that will run through Dec 11.

Windsurfing, originally scheduled for Sunday, has been reset as have other outdoor events, ABS-CBN News reported.

Organisers have insisted they have contingency plans in place, including allowing indoor events to proceed but with attendance limited to competitors.

The storm is the latest trouble for the SEA Games, which saw a series of transport snafus and a rush of last-minute construction ahead of the opening.

This year’s Games in Clark, Manila and Subic are already particularly complex, with a record 56 sports across dozens of venues that are in some cases hours apart by car.

Around 8,750 athletes and team officials are expected at this year’s 30th edition – the biggest ever – along with another 12,000 volunteers.

Organisers hope more than 500 million viewers will tune in on TV by the end of competition.

In an eclectic programme, Olympic sports like swimming and athletics sit side-by-side with regional favourites such as martial arts, and this year athletes will even battle an obstacle race course in Manila.