SINGAPORE - While Singapore's competition watchdog cannot require Uber to continue operations in Singapore after selling off its Southeast Asian business to rival Grab, it can make an interim order to stop the firms integrating, legal experts say.

Last Friday (March 30), the Competition and Consumer Commission of Singapore (CCCS) said it was investigating the Grab-Uber merger, saying it had reasonable grounds to suspect that the deal infringes the Competition Act.

The CCCS has proposed interim measures before its inquiry is completed, which require both ride-sharing companies to maintain independent pricing, pricing policies and product options as they were before the acquisition.

The CCCS added that both companies must not take any action that will affect the viability and profitability of their businesses, or lead to their integration.

Both Grab and Uber have been given the opportunity to submit representations regarding the proposed measures.

Meanwhile, Grab maintained on Thursday (April 5) that it will cease operations of the Uber app on April 8, as announced previously.

Asked about how the CCCS may proceed, Mr Wun Rizwi, a partner at RHTLaw Taylor Wessing LLP, said: "The commission may give further directions to Grab and/or Uber not to stop using the Uber app for the time being."

Mr Rizwi said that if there is non-compliance with the direction of the CCS, then the CCS can apply to the State Courts to enforce the interim directions. 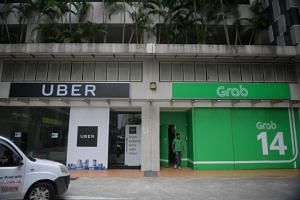 National University of Singapore law faculty's Associate Professor Burton Ong said that while the CCCS could, in theory, require Uber to continue providing services, it would be "intrusive" to do so.

"The interim measures may take the form of Grab and Uber not being allowed to proceed with the merger, as far as their Singapore operations are concerned," Prof Ong said.

"In the Singapore market, Grab would have to continue operating without Uber's resources, such as Uber's customers database or (ride-matching) algorithms. Whether Uber leaves the market then, it's entirely up to them."

NUS law faculty Sheridan Fellow, Kenneth Khoo, likewise said there is very little the CCCS can do to stop Uber from exiting the market unilaterally, as there is nothing in law to stop a loss-making firm from doing so.

"What the CCCS can do is to require Uber and Grab to act independently of each other with regard to their pricing and product options until Uber actually completely halts its operations in Singapore," he said.

"If this were not the case, the co-ordination amongst Uber and Grab could possibly amount to a violation of Competition Law as an anti-competitive agreement or a concerted practice."

As part of the Uber-Grab merger, Uber will take a 27.5 per cent stake in Grab, while Uber's chief executive Dara Khosrowshahi will join Grab's board.