SINGAPORE - The Competition Commission of Singapore (CCS) says it has grounds to suspect that Grab and Uber have infringed the Competition Act and has proposed interim measures to preserve competition while it investigates their merger.

This is the first time that the competition watchdog is proposing interim measures for companies that it is investigating.

The measures, if implemented, will require Grab and its American ride-hailing rival Uber to maintain independent pricing, pricing policies and product options, as they were before the sale.

Grab had said on Monday (March 26) when it announced the acquisition of Uber's business in South-east Asia that  it planned to cease operation of the Uber app  on April 8 and  the UberEats app at  the end of May.

The commission's statement is the latest development in the Grab-Uber deal since the CCS on Tuesday (March 27) launched an investigation into what it described as an "unnotified transaction" between the two companies.

Under the Act, the commission has the power to issue interim directions in relation to mergers it has not been alerted to and which are under investigation.

The CCS said both companies must not take any action that will lead to the integration of their businesses here, and affect the viability and saleability of the businesses.

They also should not take actions that could prejudice the commission's ability, power and options to subsequently direct the divestment of business operations in the affected markets. 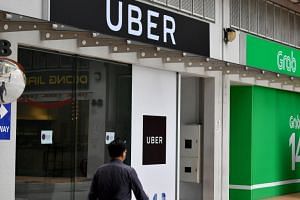 Another proposed interim measure requires that both companies do not obtain any confidential information about each other. These include pricing, formulas, customers and drivers.

Grab should also ensure that Uber drivers joining its platform of their own accord "are not subject to any exclusivity clauses, lock-in periods and/or termination fees".

Lastly, both companies must not take actions that could affect the commission's ability to impose remedies.

The commission said that Grab and Uber can make written representations and it will consider them before making a decision on whether to issue the directives.
The commission’s directives will take effect immediately from their date of issue until the completion of its investigations, or unless otherwise specified.

When asked if Grab would undo any of the measures that it has taken since the merger, which included placing Uber employees on paid leave, head of Grab Singapore Lim Kell Jay said the company will submit its response to the commission and propose measures to reassure the watchdog, including maintaining its fare structure and not increasing base fares.

Grab will make a voluntary notification of the acquisition to the commission no later than April 16, he said. He added that Grab had engaged with the commission prior to the deal and has conducted due diligence and legal analysis before entering into and concluding the merger.

Uber did not respond to queries.

In the event that the commission, a statutory board, finds that a merger  is expected to result in a substantial reduction of competition, it has powers to require the merger to be unwound or modified.

In the event of an infringement of the Competition Act, the commission can impose substantial financial penalties of up to 10 per cent of the turnover of the business in Singapore for each year of infringement, up to a maximum of three years.

Experts said the measures are more or less a stop-work order which aim to freeze the state of the market and to cease the integration process which could result in the dominance of Grab.

Singapore University of Social Sciences senior lecturer and transport economist Walter Theseira said: "It is a calibrated move on the part of the commission and is by no means an arbitrary decision. The commission needs to know the full ramifications of the merger and if public interest is being harmed.

"Companies must be prepared to make their case as to whether or not their actions are compliant with the Competition Act."