The public should be roped in to help when trains break down, the National Transport Workers' Union has suggested to an advisory panel drafting Singapore's land transport blueprint for the coming decades.

The call to build "a community of commuter volunteers who can be trained as first responders to assist our front-line workers during service disruptions or emergencies" is among a dozen suggestions the union made for the Land Transport Master Plan 2040.

It filed them yesterday to the masterplan's advisory panel, which is gathering feedback to formulate recommendations that it will submit to the Government by mid-February.

Asked what he thought of the idea to get people to help during an MRT breakdown, Singapore University of Social Sciences transport researcher Park Byung Joon said: "It's not just about being trained. It's about the right number of trained people being at the right place when it happens. Otherwise, it could add to more confusion."

Other recommendations from the union include implementing more full-day bus lanes, rolling out dedicated lanes for cyclists and restricting roadworks to off-peak hours. All these will allow buses to run more smoothly, the union said.

Reiterating a call from other quarters, the union also said transport infrastructure should be designed with ease of maintenance in mind.

It added that companies must ensure workers get enough rest when setting new performance targets. 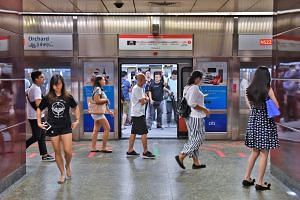 Companies should also emphasise training in the face of rapid technological changes. The union also said that bus interchanges need to have more parking spaces for the expanded public bus fleet.

Mr Yong said the union's recommendations focus on "enhancing the work environment of our public transport workers, ensuring the safety and health of our workers, preparing them for transformation, as well as building greater commuter support so that we can all promote a better travelling environment for all road users".

Just as an idea four years ago that soldiers be deployed to help in a rail breakdown whipped up debate, commuters interviewed had mixed reactions to lending a hand.

Marketing and communications head Eugene Mok, 33, said: "While the intention may be good, the onus should be on the transport operator to provide the necessary support during service interruptions.

"The timely availability and relevant training provided for commuter volunteers may not be sufficient, and may result in more confusion."

Author Jimmy Chua, 35, said: "I believe there will be people who are keen to contribute. It is good for community bonding, too.

"My only concern is that breakdowns are unscheduled, and volunteers may have to carry out their family and work commitments before they can assist."

Engineer Ng Guan Hong, 49, said: "I don't see why, as a commuter who pays for the service, I should volunteer for a profit-driven company."

A version of this article appeared in the print edition of The Straits Times on January 17, 2019, with the headline 'Call for commuters to help when trains break down'. Subscribe
Topics:
More
Whatsapp Linkedin FB Messenger Telegram Reddit WeChat Pinterest Print Purchase Article Copy permalink