SINGAPORE - Security officers at Changi Airport will soon have cameras attached to their uniforms to provide a live feed to a control centre so that help can be dispatched quickly if needed.

They will also carry mobile devices to keep track of their duties, as well as submit and update reports, said Sats Security, which is spending more than $1 million on digital and technology initiatives to enhance operations at the airport.

Plans also include a revamp of the existing control centre at the airport, it said on Monday (Oct 1).

The enhancements will improve security and operational efficiency at the airport, and help Sats better manage its resources amid a manpower crunch, said its executive vice-president (special projects), Mr Denis Marie.

Under the new system, to be rolled out progressively, video surveillance and wearables will be used to provide greater visibility of on-ground activities.

Digitalisation will also replace manual processes for the tracking of security activities before a flight, aircraft surveillance and flight tracking, Sats said.

For aircraft cleaning, for example, instead of having to manually record the names and other personal details of cleaners, the new system will allow the Sats officer to merely scan the worker's pass, Mr Marie told The Straits Times.

Resources can also be better managed, he said.

"Flights don't always come on time, so instead of making our officers wait unnecessarily, we can deploy them based on real-time information."

The initiatives will also ensure a safe work environment for security officers on the ground, Mr Marie said.

"For example, when the body camera is tilted at a certain angle, it is assumed that the officer is down. This will trigger an alarm in the control room," he added.

Mr Marie said: "Security is no longer just about deploying people to do guard duty. With technology and data analytics, we not only make the job more attractive and sexy for young people, but we are also able to significantly enhance the level of security while reducing manpower needs."

As Changi Airport continues to handle a growing number of passengers and flights, the push for automation and technology has intensified in the last few years. 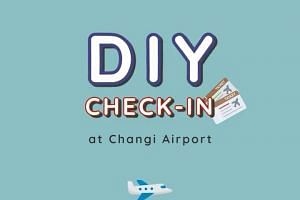 Changi Airport takes off with DIY for Fast-er boarding

From an almost 100 per cent manned system just three to five years ago, there are now about 180 self-service check-in kiosks and another 130 machines for travellers to deposit their self-tagged bags, across all four terminals.

They cover self check-in, bag-tagging and boarding, with participating airlines offering at least one of the three processes.