SINGAPORE - About 450 applications to dispose of registered e-scooters that do not meet a fire safety standard in exchange for $100 have been submitted on the first day of an early disposal scheme, the Land Transport Authority (LTA) said on Monday (Sept 23).

Owners who qualify for the incentive have to first submit an online application to dispose of their devices, before turning in the devices at the disposal points.

They could dispose of their devices at two areas on the first day - at the LTA's office in Sin Ming Drive and at a loading bay in a Boon Lay Housing Board estate.

The LTA introduced the scheme amid growing concerns of fires linked to devices without the UL2272 certification. It is a set of safety requirements covering the electrical drive train system of personal mobility devices (PMDs), including the battery system.

As of last month, there were about 90,000 registered e-scooters in Singapore - 90 per cent of these scooters do not possess the certification.

Over six months from Monday to March 31 next year, PMD owners will be able to dispose of their non-UL2272 certified devices at 180 disposal points set up by LTA-appointed e-waste recyclers across HDB estates, or at the LTA's Sin Ming office.

The e-waste recyclers are trained and equipped to ensure the safe disposal of PMDs, as well as the recycling of any reusable materials and components.

Owners who dispose non-certified registered e-scooters by Nov 30 will qualify for a $100 early disposal incentive.

Those who have unregistered e-scooters or own other PMDs, such as hoverboards and unicycles, can still dispose of their devices for free, but will not qualify for an incentive.

The LTA said it had received some 450 applications as of 5pm on Monday.

When The Straits Times visited the disposal point at a loading bay near Block 209 Boon Lay Place on Monday evening, about 20 PMD owners dropped off their devices at the location in 2½ hours.

Owners had to verify that they had submitted the application to dispose the PMDs and that the devices belonged to them.

Disposal staff would then check the devices for the necessary registration labels to ensure that the devices qualified for the incentive.

The entire process took about two minutes, and most owners were able to submit their items for disposal without hiccups.

Systems engineer Nick Ong, 28, said the $100 incentive was a fair return for his e-scooter. He had bought his device for $700 about two years ago. 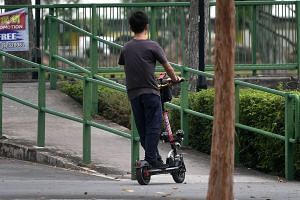 "I don't use it that often nowadays. At least I get to get back some money for it, or else I would have just left the e-scooter at home," he said.

Another e-scooter owner, who only wanted to be known as Mr Pan, brought three devices for disposal.

The 42-year-old, who works in the IT industry, said his family bought the devices about a year ago and had been using them for short-distance commutes.

But he realised the fire risk posed by non-certified devices after a charging PMD in his neighbour's house in Choa Chu Kang caught fire and ravaged the house.

"I saw the fire and the fire engines... the experience was horrifying," he said. "Without the incentive, I would have found someone to dispose of it anyway, so it's a bonus."

Retiree Tan Chai Keong, 47, said the process could be made smoother if the LTA allowed PMD users to file hard-copy applications for disposals at the disposal points.

He had to wait about 45 minutes before he could submit his application to dispose of his registered device. The delay was due to a SingPass login issue at around 5.30pm, which meant he could not log in for the application.

In the first half of this year, there were 49 fires related to the devices, an average of about two a week.

In the worst of these cases, a 40-year-old man died in hospital after being rescued from his burning flat in Bukit Batok. The blaze was linked to three e-scooters found burnt in the unit.

In contrast, there were 52 PMD-related fires in the whole of last year.