The Prime Minister's Office (PMO) said on Feb 25 that Mr Khaw would be on extended medical leave after fracturing his left arm in a fall the week before.

Mr Khaw would resume his duties as Transport Minister when he is able to do so, probably after several weeks, the PMO said in its statement.

The other MPs in Mr Khaw's Sembawang GRC have been covering his duties in his constituency.

In his post on Friday, Mr Khaw said: "After five hospitalisations, I have experienced the progress in our medical services over the decades." 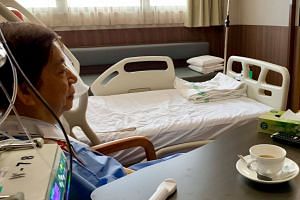 In May 2010, he had a coronary artery bypass graft.

The monitor, which is currently available in more than 30 countries, sends the user's electrocardiography readings to the NHCS continuously in real time, without using cables.

The product is non-invasive, easy to use and detachable, Mr Khaw said in his post.

On Saturday morning, Prime Minister Lee Hsien Loong commented on the post, saying he was glad Mr Khaw had been discharged and was back home.

“We all missed you in Parliament, but the MOT (Ministry of Transport) team took care of everything well. Take time to rest and recuperate, and make a full recovery!” said Mr Lee.