SINGAPORE - The Straits Times has returned home to its revamped newsroom, which has been transformed to enable its journalists to meet readers' changing needs.

The new set-up will allow journalists and editors from different desks to collaborate and work more seamlessly across platforms, producing content for its digital, mobile, video, radio and print products.

There is also a greater emphasis on using data to track readers' interests, with screens all round the newsroom displaying charts with real-time information, on what stories are trending or gaining traction with its audience.

The Straits Times moved into its current News Centre premises in Toa Payoh North in February 2002, after 43 years at Times House in Kim Seng Road. The ST newsroom occupies the second floor of the main building, and this is its first complete renovation since it moved in.

Drawing inspiration from some of the top newsrooms in the world, the refurbished space features a central hub where the key editors of all the sections are stationed.

This is critical, he said, as The Straits Times is "no longer just a newspaper but a wholly multimedia operation", and that the revamped newsroom reflects these changes.

"We thought it was time to revamp the newsroom, not just to change its look and feel, but also to reflect the changes in the way we need to operate," said Mr Fernandez. "We started from scratch and redesigned the newsroom as if we were starting to build the newsroom today."

Underpinning the newsroom's transformation is a focus on data analytics. This helps journalists and editors to understand better what readers are interested in, said ST executive editor Sumiko Tan.

Each journalist now receives a daily report on how his top stories performed digitally. There are also screens all around the newsroom showing the day's most well-read stories.

Ms Tan said that before the age of data, stories were played up on the paper and website based mostly on editors' gut feel on what matters to readers. "Now, the data proves us right," she said.

She added that one of the goals of the revamp was to create a conducive and comfortable working space. There are numerous discussion corners, nine "phone booths" where staff can make calls or collaborate on stories, as well as brighter lighting and ergonomically designed chairs.

"We want a liveable space where people are happy to come to work, and are proud to be part of the newsroom," she said.

Teams who can benefit from greater collaboration are now seated in close proximity - for instance, reporters on the education beat and those from the Schools team which produces student publications.

For example, sub-committees were formed to look into what staff wanted for the recreation areas, pantries and also heritage corners. The Straits Times has a long history, with its first issue published on July 15, 1845. 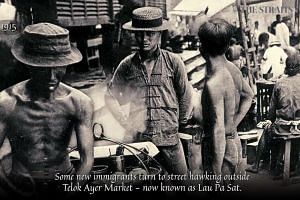 "It is still a work in progress but we are getting a lot of positive vibes about the new place, which is nice," he said of the new space.

Mr Peter Williams, head of EMTM Visual and ST art editor, said the design was guided by how journalists work in a changed media environment.

"We work faster than before, and getting a story out on our various platforms means having to work closer together," said Mr Williams, who oversaw the design aspects of the renovation.

"To be able to put out stories that matter - and across our platforms - means having to break down silos between departments, and to find ways to integrate print and digital in ways that surprise our readers."

This includes more live, personality-based programmes on social media platforms such as Facebook, and roundtable discussions with Straits Times journalists and opinion leaders.

Said Mr Fernandez: "Over the next few months, readers and viewers will see the benefits of these new facilities, as we ramp up our production of content across all our products and platforms to suit their changing information needs."